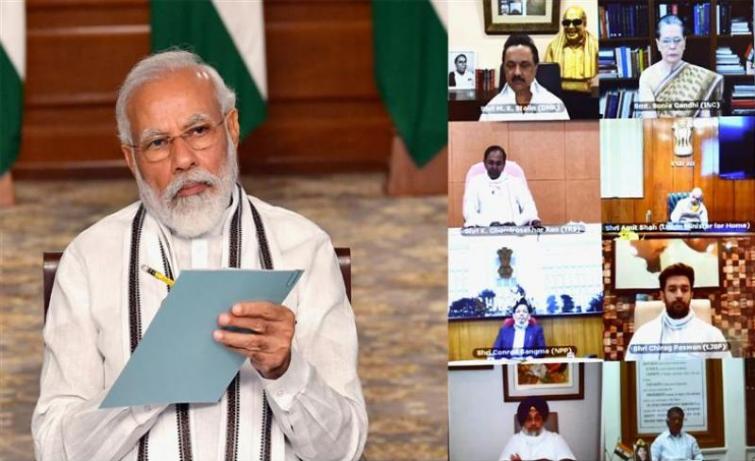 New Delhi: The Indian Defence Ministry's report about the situation along LAC in Eastern Ladakh in “no way” contradicts the remarks made by country's Prime Minister Narendra Modi in June about localised events in Galwan Valley, where a faceoff followed   between soldiers of India and China, media reports said.

Sources told ANI news agency that there are renewed attempts to misrepresent Prime Minister Modi’s remarks at the All Party Meeting on June 19 and the tool being used for this “insidious purpose” is the Defence Ministry report about the situation all along Line of Actual Control in Eastern Ladakh.

The sources said that efforts to conflate the MoD report with PM’s statement of June 19 “are obviously politically motivated”.

Such attempts strengthen the hands of the adversaries who are rattled by India’s increased border infrastructure development in strategically sensitive geographies, they told ANI.

The sources said the Indian Government has never denied Chinese attempts to transgress the LAC, change facts on the ground or alter the status quo.

In fact, in a series of talks – foreign ministers, special representatives, corps commanders and WMCC – Indian interlocutors have strongly emphasised the need for complete disengagement of troops along LAC and de-escalation from India-China border areas, they told ANI.

They said that senior veterans, retired diplomats and eminent members of the strategic community have condemned efforts to take statements out of context and play politics at the expense of our armed forces.

A day after his comment on the Galwan valley clash created confusion and earned criticisms from the Opposition in June, the Prime Minister's Office had issued a clarification and said attempts are being made to give a  mischievous interpretation to Narendra Modi's remarks.

"Prime Minister was clear that India would respond firmly to any attempts to transgress the Line of Actual Control (LAC). In fact, he specifically emphasized that in contrast to the past neglect of such challenges, Indian forces now decisively counter any violations of LAC (“unhe rokte hain, unhe tokte hain”)," read a statement issued by the PMO.

"The APM was also informed that this time, Chinese forces have come in much larger strength to the LAC and that the Indian response is commensurate. As regards transgression of LAC, it was clearly stated that the violence in Galwan on 15 June arose because Chinese side was seeking to erect structures just across the LAC and refused to desist from such actions," it said.

The focus of the PM’s remarks in the APM discussions were the events of 15 June at Galwan that led to the loss of lives of 20 Indian military personnel.

"Prime Minister paid glowing tributes to the valour and patriotism of our armed forces who repulsed the designs of the Chinese there," the statement said.

"The Prime Minister’s observations that there was no Chinese presence on our side of the LAC pertained to the situation as a consequence of the bravery of our armed forces," it said.

"The sacrifices of the soldiers of the 16 Bihar Regiment foiled the attempt of the Chinese side to erect structures and also cleared the attempted transgression at this point of the LAC on that day," read the statement.

The PMO said it is 'unfortunate' that an unnecessary controversy is being created to lower the morale of the soldiers protecting the borders of the country.

"However, the predominant sentiment at the All Party Meeting was of unequivocal support to the Government and the armed forces at a time of national crisis. We are confident that the unity of the Indian people will not be undermined by motivated propaganda," it said.

More than four decades after the last fatality occurred during a conflict at the India-China border, at least 20 Indian personnel were killed in the conflict with the Chinese military at the Galwan Valley, which is close to Aksai Chin, an area that is controlled by China but claimed by both the countries.

In a strong reaction to the violent standoff, Modi had earlier said his nation wants peace but can give a befitting reply, if instigated, reminding people of the airstrike conducted by the Indian Army following the Pulwama attack by Pakistan-sponsored terrorists in 2019.