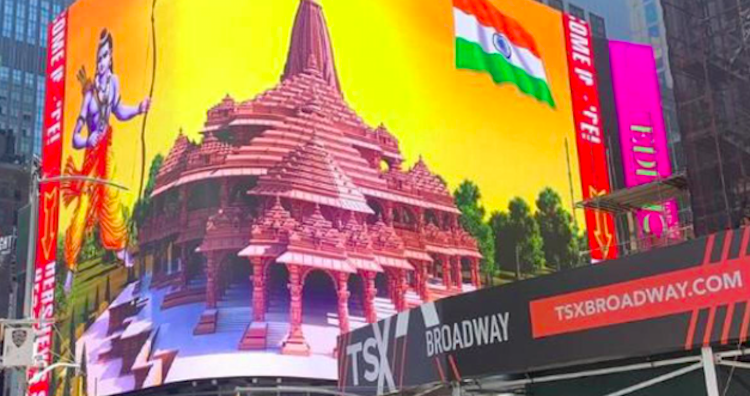 New York: It was a victory for Indian diaspora members as they shouted and outnumbered anti-India demonstrators, mostly Pakistanis, who had assembled at the Times Square in New York city to  disrupt the celebrations of the construction of Lord Ram Temple in Ayodhya by raking up the Khalistan issue.

Their attempt failed in a foreign land when Indians celebrated the groundbreaking of the temple in Ayodhya in Uttar Pradesh that had triggered massive religious conflict for decades.

Singh was only able to gather a handful of people, most of them of Pakistani origin, sources told the Indian news agency while adding that only two-three Sikhs participated in this protest.

Meanwhile, the pro-India demonstrators not only outnumbered the anti-India protesters but also had more Sikh supporters who chanted 'Jai Shree Ram' while singing and dancing to the beats of the drums, reports ANI.

An Indian community member present at the Times Square told ANI, "I wish to invite them to join us and celebrate with us and have some sweets. We are brothers and sisters."

"I think they are misguided and they should understand that the Ram Temple in Ayodhya is being constructed after the Supreme Court order. We believe in the rule of justice," he added.

As India witnessed the laying of the foundation stone of Ram Mandir at Uttar Pradesh on Wednesday, Lord Ram  appeared on a digital billboard at the iconic Times Square in New York City in the US, amid daylong confusion over the same following circulation of some images believed to be photoshopped.

The billboard displaying Lord Ram might be seen as a big achievement for the identity of the Hindus across the world and especially those in India who had been long awaiting the Ram Mandir's construction in UP's Ayodhya, believed to be the birthplace of Lord Ram.

The billboard displayed a 3-D image of the yet-to-be built temple in Northern India and the visage of Lord Ram with his bow and arrows.

The billboard appeared on a day when  Prime Minister Narendra Modi along with UP CM Yogi Adityanath and Rashtriya Swayamsevak Sangh (RSS) chief Mohan Bhagwat participated in the 'Bhoomi-Pujan' ceremony which marked the foundation for the construction of the Ram Temple in Ayodhya.

Times Square in New York City is a major commercial intersection, tourist destination, entertainment centre and neighbourhood in the Midtown Manhattan section. Brightly lit by numerous billboards and advertisements, the place is a major attraction for tourists across the world.