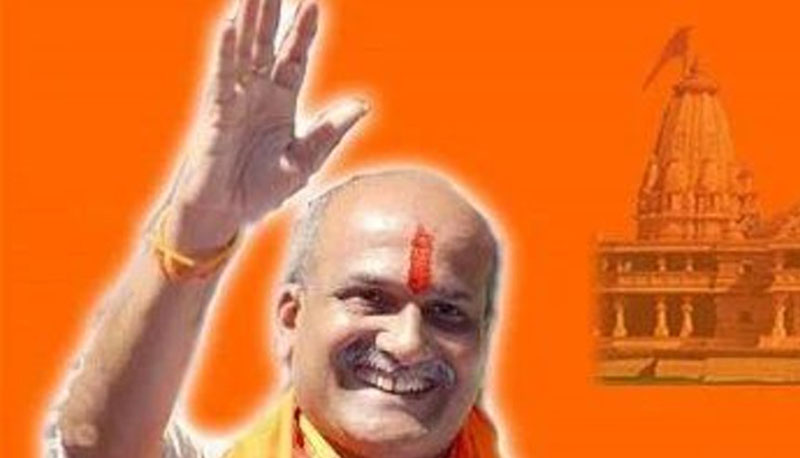 Vijaypura/UNI: In a scathing attack on the All India Muslim Personal Law Board for instigating the Hindus by stating that it would go ahead with the construction of Babri Masjid, where the Ram Temple is going to be built, the Sri Ram Sene on Saturday demanded the Central government to ban the Board.

Speaking to newspersons here, Sri Ram Sene chief Pramod Mutalik said, ''Recently, the Board had issued a statement, saying that it will go ahead and build Babri Masjid, where the Ram temple is proposed.

''By giving such a statement, the Board is only provoking the Hindu sentiments, when the decades-long dispute has been resolved by the Supreme Court.

The Board's statement amounts to the contempt of Court, which has already given verdict about 10 months ago in favour of the Temple,'' he added.

Urging the Union Government to ban the Board, the Ram Sene chief also accused the BJP government of going soft on the Board.

''I really don't understand why the BJP government is having a soft corner for the Board. Why no action has been taken against the Board so far?,'' he said, while showing a copy of the tweet, reportedly issued by the Board from its official Twitter handle.

''When the matter has been resolved amicably and Prime Minister Narendra Modi has already performed the 'Bhumi Pujan' for the construction of Temple on August 5, then why the Board has been raising the issue of Masjid after 10 months of the verdict, what is the intention behind it,'' he asked.

Muthalik also demanded the banning of SDPI for reportedly stating that Babri Masjid would be rebuilt at the same site.

Alleging the BJP government of neglecting Pravin Togadia, one of the pioneers of temple movement, Mr Muthalik wondered why he was not invited for the Bhumi Pujan programme.