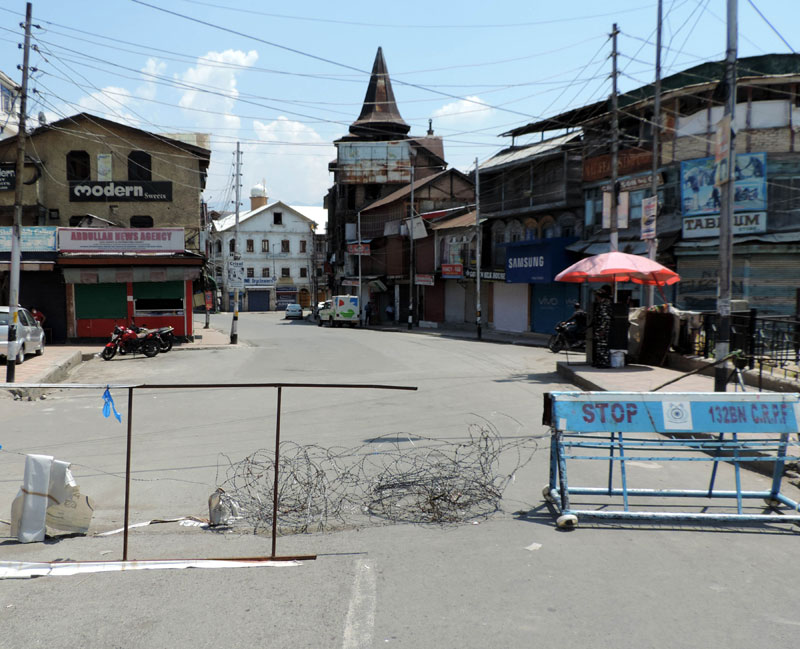 Srinagar/UNI: Police on Wednesday foiled an All-Party Meeting called by National Conference (NC) in this summer capital on the first anniversary of scrapping of Article 370 and 35 A, besides diving J&K into two Union Territories (UTs).

All roads leading to NC president Farooq Abdullah’s residence at high security Gupkar road in Srinagar, which was venue of the meeting, were closed.

Meanwhile, leaders of different political parties, who were invited to take part in the meeting, alleged that they were informed in this morning that they can’t go out of their residences in view of restrictions.

Abdullah, who is Member of Parliament (MP) from Srinagar and former chief minister, had called the meeting in an apparent move to revive the Gupkar Declaration signed by regional political parties on August 4, 2019. The declaration was signed a day ahead of scrapping of Article 370 and Article 35A, besides bifurcating the state into two Union Territories by NDA government led by BJP.

The road leading to Gupkar residence of Mr Abdullah was blocked with barbed wires on one side and security force vehicle on the other side. Security forces were deployed in strength in the area and no one was being allowed to move towards his residence.

Even the mediapersons were not allowed to enter the Gupkar road area.

Reacting to the closure of the road, former chief minister and NC Vice-President Omar Abdullah said its been one year but the authorities are still scared to allow mainstream politicians to meet much less carry out any normal political activity.

“This fear speaks volumes about the true situation on the ground in Kashmir,” he said.

“Clearly the meeting is not being allowed to go ahead. The BJP gets to announce a 15 day celebration to mark 5th Aug & a handful of us aren’t allowed to meet in my father’s lawn. So much for BJP national leaders wondering why there is no political activity,” Abdullah wrote on micro-blogging site twitter.

“One year on, this is Gupkar road today - police vehicles opposite our gates, concertina wire strung across the road at regular intervals & no vehicles allowed. My father had called a meeting of leaders of MAINSTREAM parties to deliberate on the current situation,” he wrote and also posted pictures of the road.

Senior CPI (M) leader and former MLA from Kulgam Mohammad Yousuf Tarigami told UNI that he was informed early in the morning that he can’t go out of his residence as restrictions were imposed. “Nowhere in the world would you see people being put under restrictions without a formal order. But, in Kashmir since August 5, 2019, it has become a normal procedure... it is very dangerous for democracy,” he said.

He said if the administration wants to put people under detention, there should be some formal order so that the detainees would know why they are being held.

Abdullah last week said he will not contest Assembly elections till August 5 decisions were not reversed and the special status of J&K was not restored.

He said many reasons had been given to justify abrogation of the provision that granted special status to J&K, and alleged that none of those stand any scrutiny.