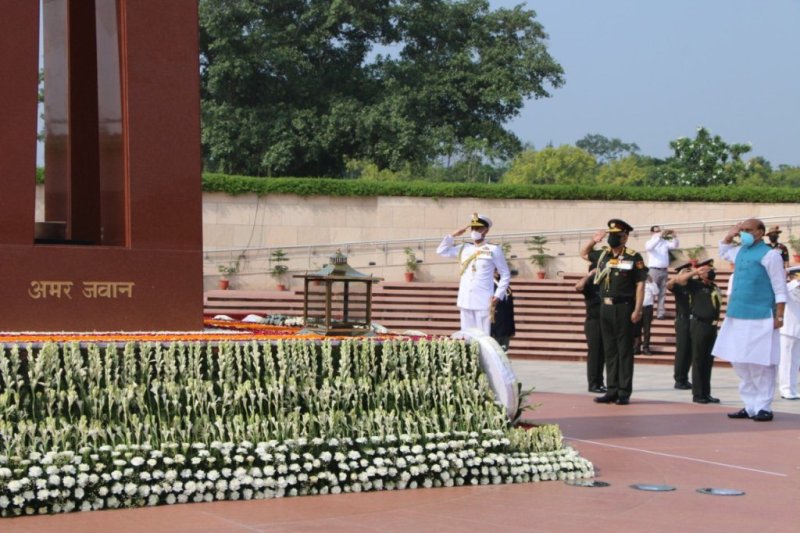 New Delhi/IBNS: India on Sunday remembered the sacrifices of the brave soldiers who fought in the 1999 Kargil War against Pakistan as the country observed the 21st anniversary of Kargil Vijay Divas.

Addressing his monthly radio broadcast 'Mann ki Baat', Prime Minister Narendra Modi paid tributes to the brave soldiers who fought in Kargil in 1999 and recalled his own visit to the place.

"That day is one of the most precious moments of my life. I am noticing, today, people are reminiscing the Kargil Victory, throughout the country. On social media, they are saluting their brave heart heroes and paying tributes to those martyred with the #Courage in Kargil," he said.

PM @narendramodi recalls his own visit to Kargil.

He also highlights how people have been talking about the courage of the Indian forces. #CourageInKargil #MannKiBaat pic.twitter.com/sS3SJ1iUe5

"Today, I, on behalf of all countrymen salute the brave soldiers….and along with them I also salute the brave mothers who gave rise to the real heroes, sons of Mother India. I urge the youth of the country to share stories of the heroic deeds of our brave hearts and sacrifices on part of the brave mothers, throughout the day," the Prime Minister said.

Earlier in the day, Defence Minister Rajnath Singh also paid his tributes to the brave jawans of the war.

Paid tributes to fallen soldiers of the Indian Armed Forces who exhibited exemplary valour and made supreme sacrifice during Kargil War.#CourageInKargil pic.twitter.com/0QfXMemss3

#KargilVijayDivas
The country salutes the supreme sacrifice of its brave soldiers;

Kargil Vijay Diwas, named after the successful Operation Vijay, is celebrated in India on July 26. On this date in 1999, India successfully took command of the high outposts which had been lost to Pakistan.

The Kargil War was fought for more than 60 days, ended on July 26 and resulted in the loss of life on both sides.

The war ended with India regaining control of all the previously held territory, hence re-establishing the the state existing before the war

The Kargil Vijay Diwas is celebrated on this date every year in honour of the Kargil War's Heroes.

Meanwhile, the social media flooded with messages to observe the day with '#KargilVijayDiwas2020.'

21 years since my father, along with many others, left for the war front, it had been a year since he had been gone. I was barely a few months old. it was beyond fortunate to have him return to us when the war ended.