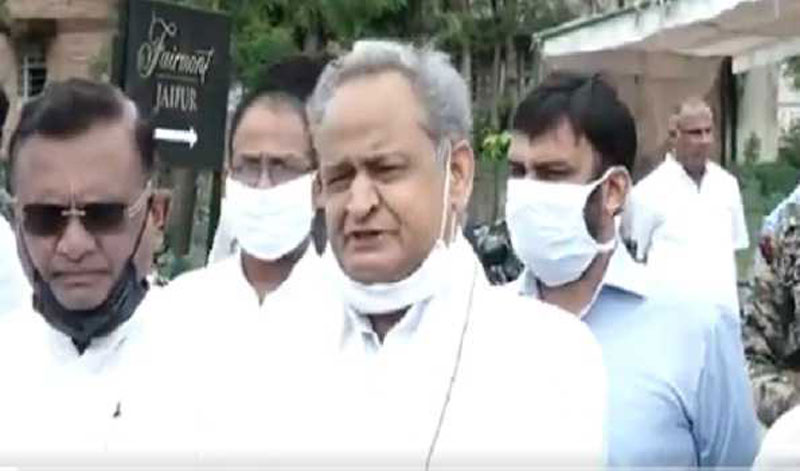 Jaipur/UNI: Rajasthan Chief Minister Ashok Gehlot here on Friday urged Governor Kalraj Mishra to call Assembly session urgently so that he can prove the majority at Floor of House.

"Floor test is needed. Even Opposition and judiciary want it. Due to this political turmoil, it's the people of the state who are suffering," Mr Gehlot told reporters here.

The chief minister informed the media that he has personally called the Governor and asked him to deliver his constitutional obligation.

"I know you (Governor) are under pressure from outsiders (BJP). Do what is right and moral," the chief minister opined.

Mr Gehlot expressed confidence that he has numbers to prove the majority. "Who is in power or not. Everything will become clear at Floor of House," he asserted.

He stated that his party (Congress) wants Assembly to begin from Monday onwards.

Mr Gehlot warned the Governor that if Assembly session is not called situation could go out of control and people out of anger might 'gherao' his office.

"Several rebels are pleading for help. They (BJP) have taken away their mobile phones and even encircled by bouncers. Is this democracy?", he alleged.

Mr Gehlot questioned Centre's 'silence' on Congress MLAs being holed up in BJP-ruled Haryana and remaining over 280-km-away from the pink city.

"They (BJP) did this in Karnataka, then Madhya Pradesh and now trying their best in Rajasthan," he alleged.

Mr Gehlot alleged that he was also astonished to see the BJP playing 'petty politics' at a time of COVID-19 pandemic.

"We (Rajasthan government) are fighting COVID-19 and whole country is praising our management. But see what they (BJP) are doing?" he questioned.

If the disqualification of 19 MLAs take place, the strength of the Assembly will be reduced to 181, with a new halfway-mark of 91 required to rule the House.

In the present Assembly, Congress has 107 MLAs while Bharatiya Janata Party 72.

Rajasthan plunged into a political crisis after Mr Pilot and his loyalists revolted against Mr Gehlot and left the desert state. Later, Mr Pilot was stripped of the dual posts of Deputy Chief Minister and state Congress president.