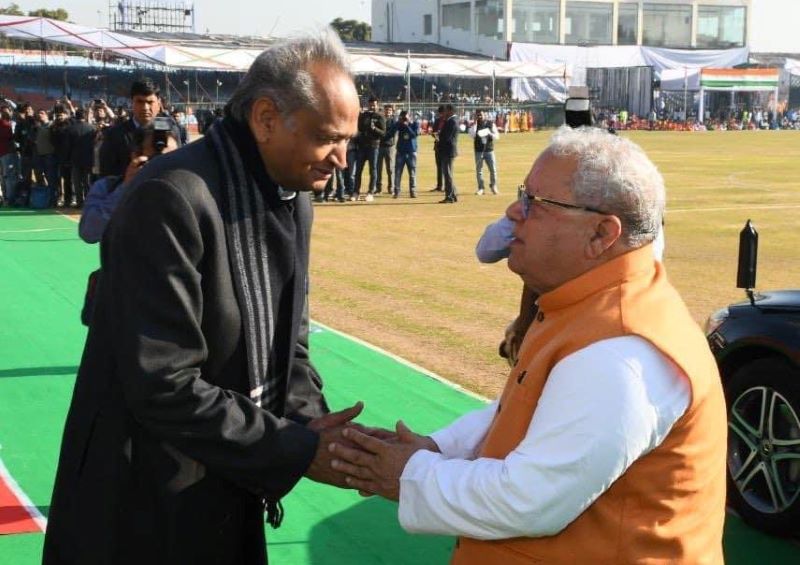 Jaipur/IBNS: Rajasthan Chief Minister Ashok Gehlot on Friday said he would not take the responsibility of a mass protest outside Raj Bhawan if Governor Kalraj Mishra does not open assembly to conduct a floor test, giving the ruling party a chance to prove majority.

Gehlot, who has accused the Governor of acting "under pressure from the top '', said this after rebel Congress leader Sachin Pilot and his 18 loyalists got a marginal relief from the Rajasthan High Court on Friday.

The high court has said no rebel MLAs can be disqualified by Speaker CP Joshi for now.

Alleging a conspiracy by the opponent Bharatiya Janata Party (BJP), the CM said as quoted by media, "We requested him to call a session last evening and we waited all night, but there was no response. It is beyond comprehension what kind of forces would compel him to delay such a simple process."

"We have a clear majority and we want the assembly to start from Monday."

"We are going with all our MLAs to make a collective request. The people of Rajasthan are with us. If the masses surround the Raj Bhawan, we will not be responsible," he added.

The Rajasthan High Court on Friday asked Assembly Speaker CP Joshi to maintain status quo, an order which will not need 19 rebel Congress MLAs including Sachin Pilot to reply to the disqualification notices served to them.

The central government has been allowed to be a party to the case by a bench of Chief Justice Indrajit Mahanty and Justice Prakash Gupta.

The Pilot camp had filed a plea in the high court challenging the disqualification notices served to them by Speaker Joshi.

Eyes on Supreme Court too

The Supreme Court will on Monday resume hearing a plea filed by Joshi to stop the High Court's verdict on the matter.

The top court has already ruled the rebel MLAs can't be disqualified till Monday irrespective of the high court's judgement.

The Congress government in Rajasthan plunged into a political crisis almost two weeks ago following a rebellion by then deputy Chief Minister Sachin Pilot and his loyalists.