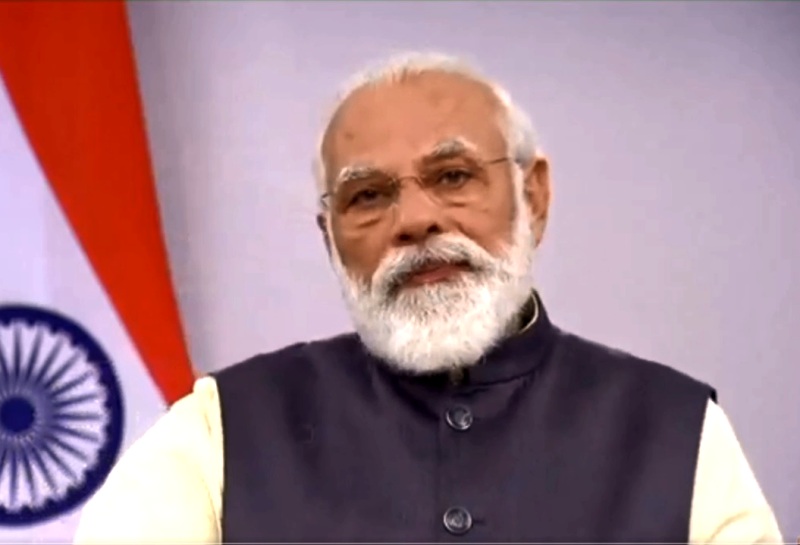 India has one of the best COVID-19 recovery rates globally: PM Modi at UN session

New Delhi/IBNS: Prime Minister Narendra Modi on Friday said India has one of the best COVID-19 recovery rates in the world while delivering a keynote address at the High-Level Segment of the Economic and Social Council session of the United Nations.

"COVID-19 pandemic has severely tested the resilience of all nations. In India, we have tried to make the fight against the pandemic a people's movement, by combining the efforts of Government and civil society," the Indian Prime Minister said.

He said that in the fight against COVID-19 pandemic, the grass-roots health system is helping India ensure one of the best recovery rates in the world.

"We are also on track to remove TB  by 2025. Other developing countries can learn from the scale and success of India's development programmes. And from the technologies and innovations, we have deployed. It is this realisation that underpins India's own development partnership with the global South," said he.

Speaking at the High-Level Segment of ECOSOC. https://t.co/BYh60MU7Ku

"Be it earthquakes, cyclones, Ebola crisis or any other natural or man-made crisis, India has responded with speed and solidarity. In our joint fight against COVID,  we have extended medical and other assistance to over 150 countries," the PM said.

Starting his address, PM Modi said: "This year we celebrate the 75th Anniversary of the founding of the United Nations. It is an occasion to recognise the UN's many contributions to human progress. It is also an opportunity to assess the UN's role and relevance in today's World."

He noted that India was among the 50 founding members of the United Nations immediately after the Second World War.

"A lot has changed since then. Today the UN brings together 193 member countries," said he.

PM Modi said that from the very beginning, India has actively supported the UN's development work and the ECOSOC.

"The first president of ECOSOC was an Indian. India also contributed to shaping the ECOSOC agenda," said the PM.

The Indian PM said that India is home to one-sixth of humanity and therefore knows the responsibility.

"We are mindful of our weight and responsibility. We know that if India succeeds in achieving its development objectives, it will go a long way in achievement of global goals," said he.

India is home to one-sixth of humanity. We are mindful of our weight and responsibility. We know that if India succeeds in achieving its development objectives, it will go a long way in achievement of global goals: PM @narendramodi

"Our motto is 'Sabka Saath,  Sabka Vikaas,  Sabka Vishwas'  - meaning 'Together, for everyone's growth,  with everyone's trust'. This resonates with the core SDG principle of  leaving no one behind," said the PM.

Last year, we celebrated the 150th birth anniversary of the Father of our Nation, Mahatma Gandhi, by achieving full sanitation coverage in our six hundred thousand villages: PM @narendramodi

"We have leveraged the power of technology for financial inclusion. This is based on the trinity of a unique identity number, a bank account, and a mobile connection for everyone," said the PM.

Speaking about his government's initiatives, Modi said: "Our ‘Housing for All’ programme will ensure that every Indian will have a safe and secure roof  over her head by 2022, when India completes 75 years as an independent nation."

PM Modi also noted that while marching forward on the path of development, India is not forgetting its responsibility towards the planet.

"Over the past few years, we have reduced 38 million tonnes of carbon emissions annually," he said.

While marching forward on the path of development, we are not forgetting our responsibility towards our planet. Over the past few years, we have reduced 38 million tonnes of carbon emissions annually: PM @narendramodi

"We have an age-old tradition of living in harmony with nature. We launched one of the largest campaigns for cleanliness  and discouraged usage of single-use plastic," he said.

"Internationally, our initiative to set up the International Solar Alliance was a practical manifestation of climate action. Similarly,  the Coalition for  Disaster Resilience  Infrastructure brings together all relevant stake-holders," said he.

Modi said India firmly believes that the path to achieving sustainable peace and prosperity is through multilateralism.

"Today,  while celebrating  75 years of the  United Nations,   let us pledge to reform the global multilateral system.  To enhance its relevance,   to improve its effectiveness,  and to make it the basis of a new type of human-centric globalisation," said he.

"The United Nations was originally born from the furies of the Second World War.  Today, the fury of the pandemic provides the context for its rebirth and reform. Let us not lose this chance," he said.

With our deep commitment to maintaining global harmony, to improving socio-economic equity, and to preserving nature's balance, India will play its role in full support of the UN agenda: PM @narendramodi