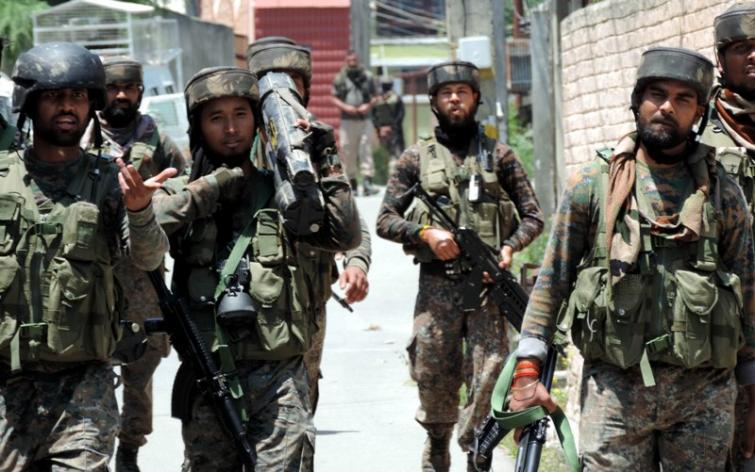 Srinagar, Jul 11 (UNI) Alert troops foiled a major infiltration bid from Pakistan Occupied Kashmir (POK) on Saturday when they killed two heavily armed militants immediately after they sneaked into this side at Line of Control (LoC) in the frontier district of Kupwara in north Kashmir, official sources said.

Official sources said that troops guarding the LoC at TMG post in Naugam sector, Handwara in Kupwara noticed a group of militants sneaking into this side under the cover of darkness early this morning from POK.

However, alert troops laid an ambush and asked militants to surrender who opened indiscriminate firing with automatic weapons.

The troops also retaliated ensuing in an encounter, they further said adding later when firing stopped two bodies of militants were found in the area. Two AK rifles and other arms and ammunition were recovered from the slain militants, believed to be foreigners.

The sources stated that troops of nearby camps were also put on alert and a massive Cordon and Search Operation (CASO) was launched in the dense forest area near LoC, adding that there could be some militants hiding in the woods.

The operation was going on when the reports last came in, they further stated adding a large number of trained and heavily armed militants were waiting at launch pads to sneak into this side before the infiltration routes were closed due to snowfall.

However, they affirmed that troops already were on high alert to foil any infiltration bid by militants from POK and latest gadgets were being used to spot the militants in border areas.

Meanwhile, Director General of Police (DGP) Dilbagh Singh and senior Army officers have recently said that Pakistani troops were violating ceasefire to help militants at launch pads to infiltrate into this side.

However, Mr Singh added that majority infiltration bids were foiled resulting in killing of militants at the LoC but, he admitted that some militants had managed to sneak into this side.