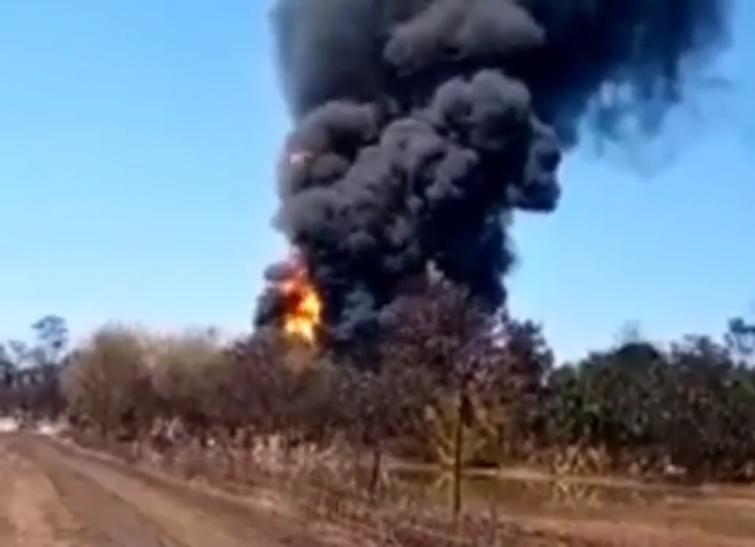 Guwahati/IBNS: It has been nearly a month since a gas well of Oil India Limited at Baghjan area in Assam’s Tinsukia district caught fire, but it continues to blaze.

A massive fire took place in the gas well of Baghjan oil field on June 9 and the incident occurred at a time when the experts and engineers of Oil India Limited were engaged to control the gas and oil emission continued at the site after the blowout of a gas well in the oil field managed by Oil India Limited on May 27.

Two firefighters had lost their lives in the fire.

Nearly 9000 people were shifted to relief camps following the incident.

On the other hand, protests are continuing at Baghjan area and the affected villagers have demanded the Oil India Limited and district administration to fulfill their demands including providing compensations and rehabilitation package.

A local villager of Baghjan area said that the 15-day deadline to accept our 13-charter demands submitted to Oil India Limited has already ended, but the authorities have not taken it seriously.

“Thousands of people are still at relief camps and the situation is yet to control. The Oil India Limited had earlier said that the fire to be doused by July 7 and later it extended to July 10-11. They again said that it will take 10-15 days more to douse the fire. We don’t know when it will be controlled. We are facing a lot of problems. It is now uncertain that, when the situation will come normal,” the local villager said.

The villagers have also threatened to self-immolate if their demands will not fulfil immediately.

The Oil India Limited also said that, surveys for assessment of damage for compensation by the committee constituted by district administration are in progress and damage assessment for 517 families completed in Doomdooma Circle and 598 families in Tinsukia Circle July 8 and the total number of families assessed till July 8 is 1115.

“Blockade still continues at Baghjan EPS since July 7 and it severely affecting OIL’s oil & gas production, which is a matter of serious concern for OIL. Since the time of safe movement of affected villagers to relief camps, OIL has been continuously taking utmost efforts to provide all relief and rehabilitation facilities to all people evacuated and has also released compensation amount of Rs 4.83 crore as an immediate relief on June 11 and the second tranche of Rs 4.17 crore remitted on July 8,” Oil India Limited said.

On the other hand, OIL has faced a production loss of 9956 MT Crude oil, 14.37 MMSCM of natural gas due to bandhs, stoppage, blockades since May 27.