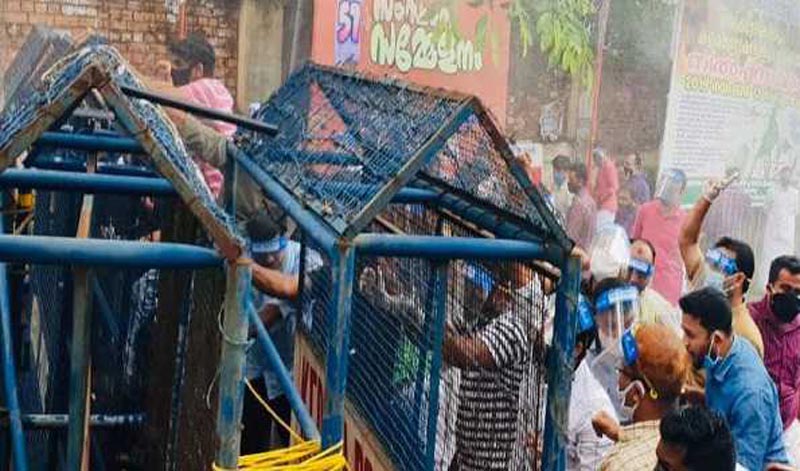 Kozhikode/UNI: Youth League, the youth wing of the Indian Union Muslim League (IUML) on Friday staged a protest demonstration in front of the Collectorate here demanding the resignation of Chief Minister Pinarayi Vijayan as his office is allegedly having close links with the gold smuggling racket.

As the Chief Minister’s office is allegedly having close links with the smuggling racket, which is evident from the alleged involvement of none other than the former Principal Secretary to Vijayan, M Sivasankar, the Chief Minister has no moral authority to remain in office, the youth league leaders said.

Youth League General Secretary P K Firoz had on Thursday alleged that two MLAs from Kozhikode district, belonging to the LDF, had nexus with the gold smuggling racket.

IUML National General Secretary and Lok Sabha MP P K Kunhalikutty yesterday demanded the resignation of the Chief Minister owing moral responsibility as a top official in his office allegedly had close ties with the accused in the gold smuggling case.

The narrative by the Chief Minister that none in his office had any connection, whatsoever, with the gold smuggling cannot be chewed without a pinch of salt given the fact that top officials and others in his office allegedly had close rapport with the accused.

The Chief Minister should therefore resign and face an investigation to prove his innocence, the league leaders demanded.

Police used water cannons and then fired tear gas shells as protestors tried to unseat the barricades placed in front of the Collectorate to prevent the agitators from entering the compound.

However, the police had to resort to lathicharge as the agitators staged a sit-in dharna.

Police sources said a case for violating the Covid-19 protocol would be registered against the agitators, numbering around 40.