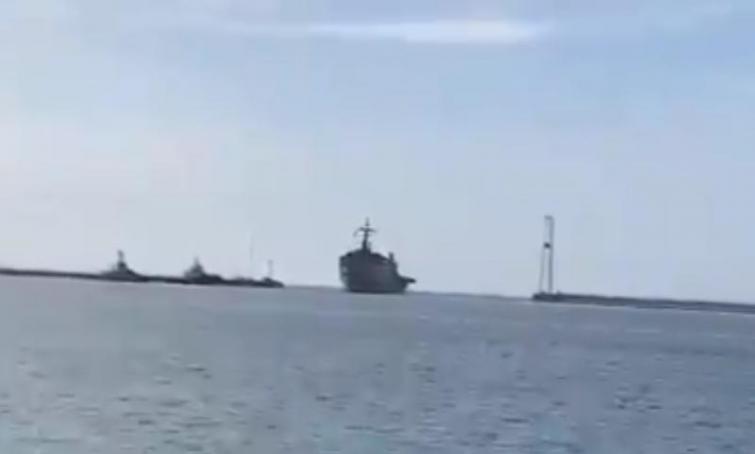 Thoothukudi/UNI: Indian Navy repatriated 687 Indian Nationals to VOC Port here after they have been stranded in Iran owing to Coronavirus-related travel restrictions.

Official sources said the repatriated persons, all of them fishermen and hailing from various districts in the state, had gone to Iran for fishing on contract basis.

They got stranded there as flights were cancelled owing to the COVID-19 restrictions. Based on the request from them, the humanitarian mission using the Naval ship has been facilitated by the Indian embassy and the administration in Iran, the sources added.

INS Jalashwa reached the Bandar Abbas Port on June 24 and departed with the Indian nationals on the next day.

After the repatriates disembarked from the ship, the passengers were screened for COVID-19 and their baggage were disinfected.

On issue of PPE kits by the Port authorities to all the passengers, they were transited to the Passenger terminal, where self-declaration forms were obtained from them.

The passengers were asked to download and configure the "Arogya Setu" app in their smartphones, using the free Wi-fi provided by the Port authority.

Refreshment breakfast and lunch for all the passengers were jointly arranged by the Port authority and the district administration.

After the completion of Immigration and Customs formalities, the passengers were later sent to their home districts in special buses
.
The Centre has made arrangements to bring home Indian Nationals stranded in different countries due to Novel Coronavirus under the "Operation Samudra Setu."

For the VOC Port in Thoothukudi, this is the fourth time an Indian Naval rescue ship drops its anchor with the evacuees under the Operation Samudra Setu.

On June 2, as many as 713 Indian Nationals who were stranded in Sri Lanka were repatriated by INS Jalashwa to the VOC Port. Of the repatriates, 693 were from Tamil Nadu, three from Kerala, two from Karnataka and one from Puducherry.

Similarly, another batch of 700 Indian expats, including 655 men and 45 women were brought from Maldives to the VOC Port by INS Jalaswa on June seven.

On June 23, Indian Naval Ship INS Airavat repatriated the second batch of 198 Indians -- 195 from Tamil Nadu and three from Union Territory of Puducherry, stranded in Maldives to the VOC Port.