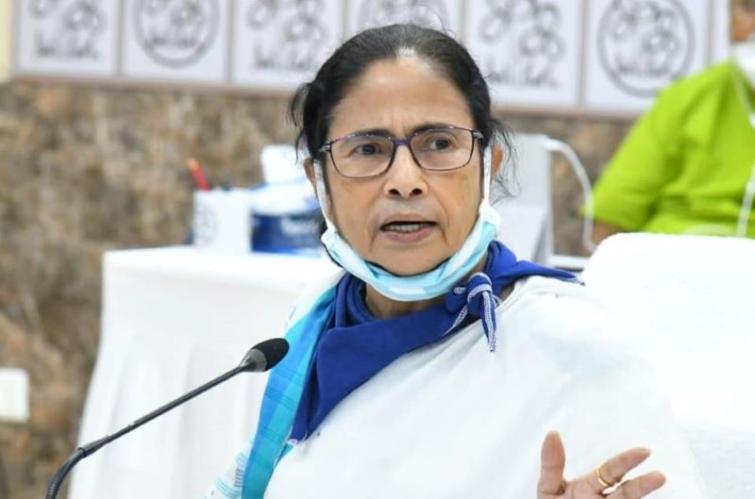 Kolkata/IBNS: West Bengal Chief Minister Mamata Banerjee on Monday requested the central government to suspend the train and flight services from five worst Covid-affected parts of the country to her state, in a bid to stem the further spread of the pandemic Novel Coronavirus.

Mamata told a press conference at state headquarters Nabanna, "The chief secretary (Rajiva Sinha) has sent a letter to stop trains coming from the five worst-affected states to West Bengal in a bid to curb the spread of the disease."

The CM has also asked the Centre to limit the domestic flights from other states- except the five most Covid-affected ones- to once a week.

"With regards to domestic flights, we are requesting (Centre) to run planes within the states but limit to once per week from states other than the five worst-hit ones. It is not possible to monitor all flights coming to the state as Civil Aviation didn't adopt any mechanism. It is a kind of burden for us," she said.

West Bengal on Monday recorded the biggest single-day spike in terms of Covid cases by reporting 624 positive cases taking the overall tally to 17,907.

14 Covid patients died in the state in the last 24 hours raising the toll to 653.

Mamata on Monday said the Kolkata Metro Railway has agreed to provide limited services for people associated with "essential services."

"We had asked the Metro Rail to run full service. But the Metro Rail said it can give services for people associated with essential sectors. Even with that service from the Metro Rail, half of the population can be covered," the CM said.

In response to the CM's comment, Kolkata Metro CPRO Indrani Banerjee said, "We have requested the state government that only allowing people for essential services in metro will be a better idea because maintaining social distancing inside the coaches will be a very challenging task."

Last week, Mamata had requested the Kolkata Metro to resume its normal services with the number of passengers equal to that of the seats.

The CM has announced a state holiday on Jul 1, the birth anniversary of former West Bengal Chief Minister Dr. Bidhan Chandra Roy, as a tribute to the doctors and healthcare workers who are combating Covid-19.

"Paying respect to all the frontline Covid warriors and healthcare workers, doctors, the state government has decided to announce a holiday on Jul 1 on Doctors' day. This will be a part of the most befitting tribute to the sacrifices of all Covid warriors," Mamata said.