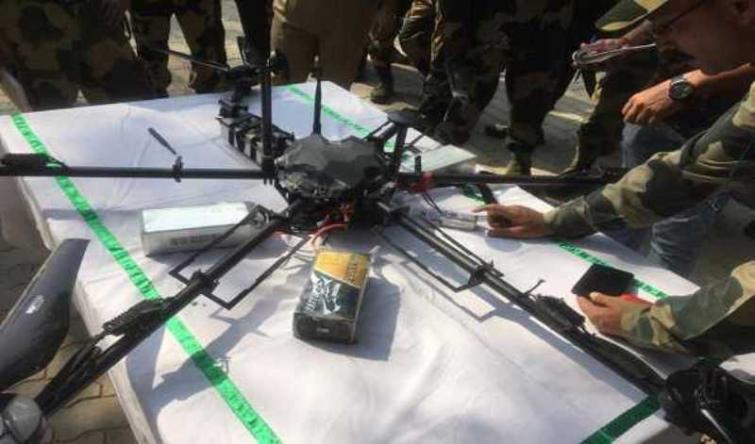 New Delhi/UNI: The Border Security Force on Saturday shot down a Pakistani drone which was carrying a huge cache of arms and ammunition at International Border at Heeranagar sector in Kathua of Jammu sector.

The Pakistan drone, spotted by the 19th Battalion of BSF in the wee hours on Saturday, was carrying a US made M4 carbine machine, two full magazines of 60 rounds and seven Chinese Granade, the Force said here.

Around 0510 hrs, the alert BSF team spotted the movement of one Hexa Copter drone at the height of 150-200 feet coming from Pakistan side which had already entered into Indian territories and shot down the intruder drone immediately.

The border guarding force said in a statement that the Hexa Drone was a Chinese make and was 8X6.2 feet, carrying four batteries and fitted with one radio signal receiver and two GPSs.

Of late, the BSF intelligence unit had been receiving regular inputs about possible use of drone for ferrying arms and ammunition from Pakistan, therefore, the troops were put on high alert and border domination was exponentially increased.

This is not the first time that the perpetrators across the border are using drones for ferrying arms or drugs in India.

On Jan 14, a drone was spotted along the Indo-Pak border in Punjab's Ferozepur district and the patrolling team of the Force opened fire to bring it down.

The drone was also sighted in Tendiwala village near the Shameke border post on January 13 .

Similarly, in April 2019, the BSF had shot down a Pakistani drone in Tarn Taran district of Punjab, coming from Pakistani side.