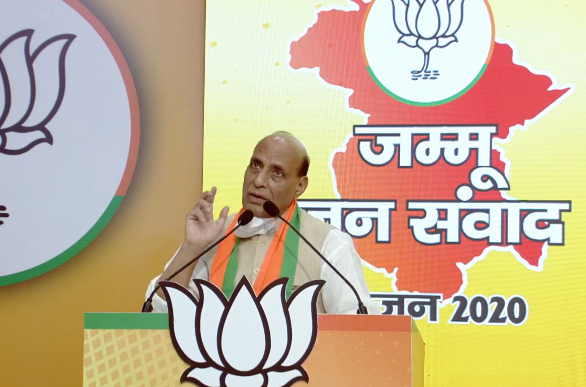 People of PoK may soon reject Pakistan and come to Indian side: Rajnath Singh

Jammu/UNI: Indian Defence Minister Rajnath Singh on Sunday said it may soon happen that people of Pakistan Occupied Kashmir (PoK)  would reject Pakistan and come to the side with India.

Bharatiya Janata Party has come a long way since 2 MPs in 1984 to rewriting history by returning back to power for the second time simultaneously now and it is in BJP’s nature to face the challenges and do the things that are in best interest of nation and society, he said.

Singh was addressing the masses and BJP activists of Jammu & Kashmir on the occasion of completion of an eventful 1 year of Modi 2.0 through digital “Virtual Rally” from the BJP National Headquarter, New Delhi.

Singh said that in the of the corona pandemic presently, the BJP is conducting virtual rallies through digital modes as this is the most important time to keep in touch with one another.

He said that this advancement marks the initiation of a new digital era, which will trigger major changes in Indian politics.

He said that with the change in weather and temperature of Muzzaffarabad and other areas shows that Pakistan is trying to play its mischievous plots, but, all such acts are being given a befitting reply by our brave army jawans.

He said, "Earlier we used to see Pakistan and ISIS flags in some sponsored protests which have vanished and replaced by the Tiranga being furled everywhere in the Kashmir today."

"Today, we have the real Kashmiriyat which also involves Baba Amarnath Barfani and a blend of other cultures as well," he added.

Singh said that BJP has a nature of presenting a report card after 1 year of its government and as such the digital rallies were planned so as to follow all the guidelines relating to corona advisories.

He said that many developed and strong nations of the world have failed before the corona pandemic, but we restricted it in very initial stages itself with the strong decision taken by our worthy Prime Minister Narendra Modi.

He said that the lockdown saved many lakh precious lives, which was praised all over the world, including the WHO.

Rajnath Singh said that the other political parties used to taunt BJP that Article 370, Shree Ram Mandir are only election gimmicks for BJP, but now we have proved that we do what we promise.

Rajnath Singh said that India has emerged as one of the strongest nations in the world now, even generating massive support from almost all the Muslim nations except a few.

Questioning the Congress for its pseudo-secularism, Rajnath pointed out that while the term “secular” was applied to the whole of India by adding amendments to the constitution, but then why was J&K not made “secular” by the Congress. Congress was never a “secular” party, he insisted.