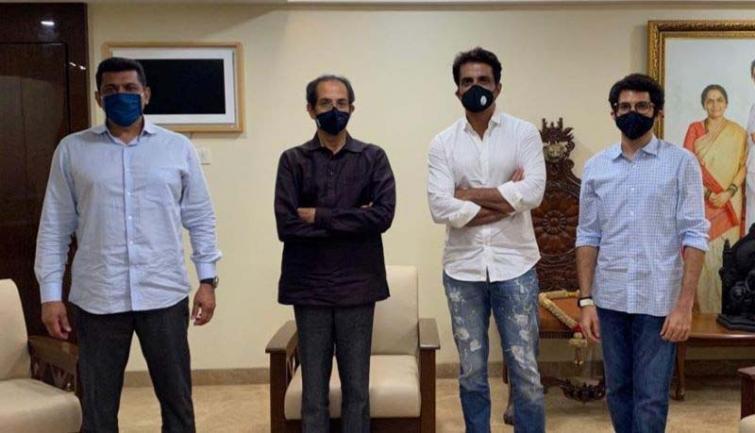 On Sunday night, the Maharashtra CMO tweeted a picture where Sood was seen with the CM, Maharashtra minister Aaditya Thackeray and Congress MLA Aslam Shaikh.

Raut in his satirical article in party mouthpiece Saamana said a new "Mahatma" has emerged in the lockdown period who would soon meet Prime Minister Narendra Modi and possibly also "go for promotion of the party".

The actor who gained immense appreciation for reaching out to migrant workers during the Coronavirus-induced lockdown attracted the wrath of the Shiv Sena leader who said Sood was a "puppet in the hands of BJP".

The actor flew a total 180 migrants which comprised of patients, pregnant women & elderly people to their hometown in Uttarakhand today. The migrants were stranded on roads for several days & they reached out to the actor for help. *He has started the Ghar Bhejo initiative with @Goel.Neeti to get migrants reunited with their families! #instadaily #manavmanglani

The Shiv Sena leader said Sood was sending off migrant labourers in buses using the money of a charitable organisation.

Sood in the last two months had arranged a number of buses to help hundreds of stranded migrant workers to reach their home states.