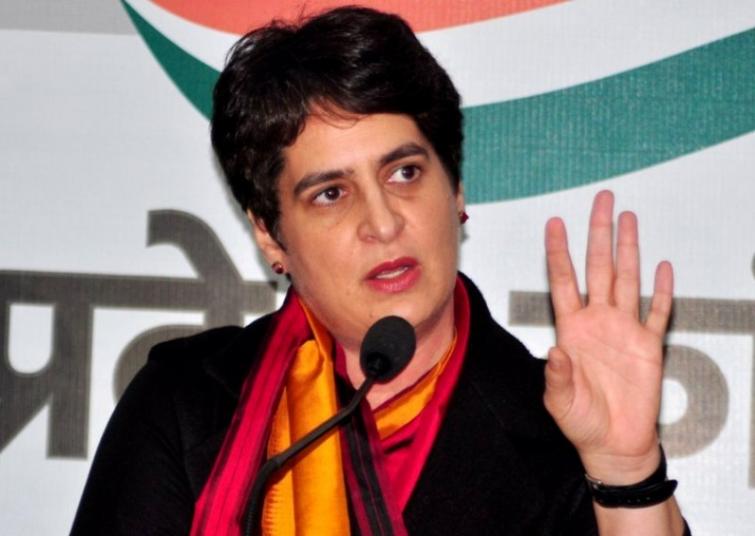 Lucknow/UNI: Congress General Secretary Priyanka Gandhi on Friday slammed the Uttar Pradesh government after a sugarcane farmer committed suicide in the state over his pending dues.

In a series of tweets in Hindi, Priyanka Gandhi Vadra, who is also the party in-charge for Eastern Uttar Pradesh said, "Seeing his sugarcane crop drying in the field and not getting the slip, a sugarcane farmer of Muzaffarnagar committed suicide. The BJP claimed that full payment would be given in 14 days, but the sugar mills have been closed with payment due worth thousands of crores."

"I had apprised the government two days ago. One can imagine how these sugarcane farmers would be feeling during this financial crisis without getting the payment for their dues. But now the BJP government does not even mention about the sugarcane payment in 14 days," she said.

She also attached a news report of the suicide by the Muzaffarnagar sugarcane farmer with her tweet.

In one more tweet, Vadra also accused Bharatiya Janata Party (BJP) for investigating crores of rupees in false publicity but not capable to solve real problems of people.

"In a tragic incident, a farmer of Barabanki committed suicide due to financial distress. People from all over the country are facing same problems of livelihood, employment, business, children's fees, farming and loans and loans during this crisis," tweeted Vadra.

Meanwhile, in Amethi, a signage that carried a remark about Rajput king Maharana Pratap has been removed after a Congress MLC Deepak Singh raised objections and alleged that the Uttar Pradesh government was showing disrespect to the 13th century Mewar ruler who has become a symbol of pride.

Singh, who sent a letter to the district administration in this regard, said, "The hoarding said that time is supreme and it even made a king (Maharana Pratap) eat 'rotis' made of grass. The message hurt the sentiments of the Thakur community and we sought removal of the same."

The hoarding, put up in Jagdishpur area, was taken down late on Thursday.

He said, "It is a fact that Maharana Pratap did eat rotis made of grass, but the incident demonstrated his strong self-respect. After the battle of Haldighati, Maharana Pratap and his family took refuge in the forest."

"Maharana Pratap had nothing to eat but he chose to eat rotis made of grass instead of bowing before his opponents." he added.

State minister Suresh Pasi, who belongs to Amethi, said that the signage had been put up by mistake and there was no intention to hurt anyone.