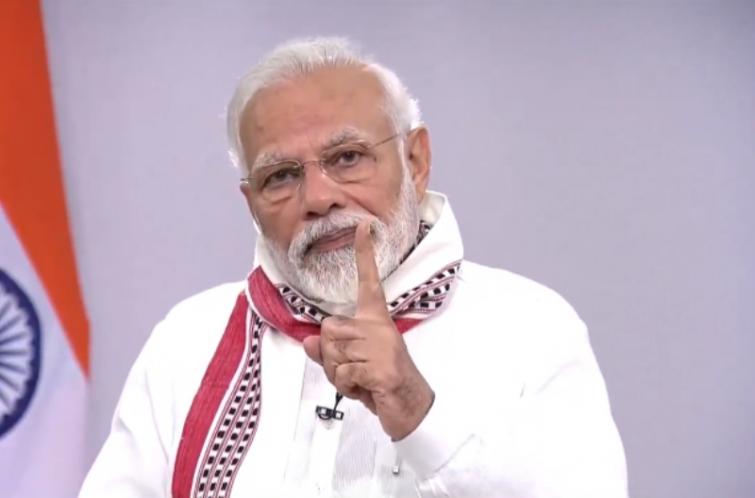 New Delhi/IBNS:  Amid Centre's plan to open up the economy, Prime Minister Narendra Modi on Sunday addressed the 64th edition of Mann Ki Baat in which he urged people to strictly follow the protocols of coronavirus.

"Last time when I spoke, passenger and air travel were shut. Now all due restrictions have been lifted. We need to follow all COVID-19 protocols more sincerely from now," he said during his monthly radio address.

Modi acknowledged the contributions of all sections during his address in their fight against the coronavirus and said the victory over the pandemic will depend on innovations.

"The victory over Corona will depend on innovations. A vaccine for the virus has not yet been developed. Poor people and shramik workers have suffered the most," he said.

"Our friends in railways, centre, states are working day and night. Railway officials are in a way corona warriors," said the PM.

"We Indians have shown that service and sacrifice are a way of life. People who work for others do not face problems. Service rendered by doctors, police officers is credible. I have acknowledged their contributions before as well," he said.

Modi also noted that new schemes are required to uplift the condition of the migrant labourers.

"We aim to make the villages self-reliant and had the same been done earlier, many problems could have been averted," said Modi in a veiled attack to the former Congress government.

"I'm happy to note that people have taken upon themselves to make India self-reliant and promoting 'vocal for local'," said he.

Modi also went on to share how yoga has inspired world leaders and the benefits of practising the same in the fight against the highly contagious virus.

"I want to share a secret with you that while I have conversations with several world leaders, many of them have shown interest in Yoga and Ayurveda. They have sought information if yoga can help in coronavirus treatment," said Modi reminding people of International Yoga Day, which would be celebrated on June 21.

"From world leaders to Hollywood actors, people are taking up yoga practices. This is more important as yoga helps immune our respiratory system, the one affected most by the coronavirus," said the Indian PM.

He also informed about the Ministry of Ayush's new attempt to promote yoga internationally.

"Ayush Ministry has started a video blog called 'My Life My Yoga' encouraging people worldwide to participate in an international contest by uploading a 3-minute video of how yoga changed their lives," said he.

Urging people to do their bit for the conservation of biodiversity, PM Modi said, "I appeal to you to plant a few trees on World Environment Day. Summers are here, so don't forget to keep water for the birds outside your homes."

He also assured citizens that the country will be able to fight the locust threat as well.