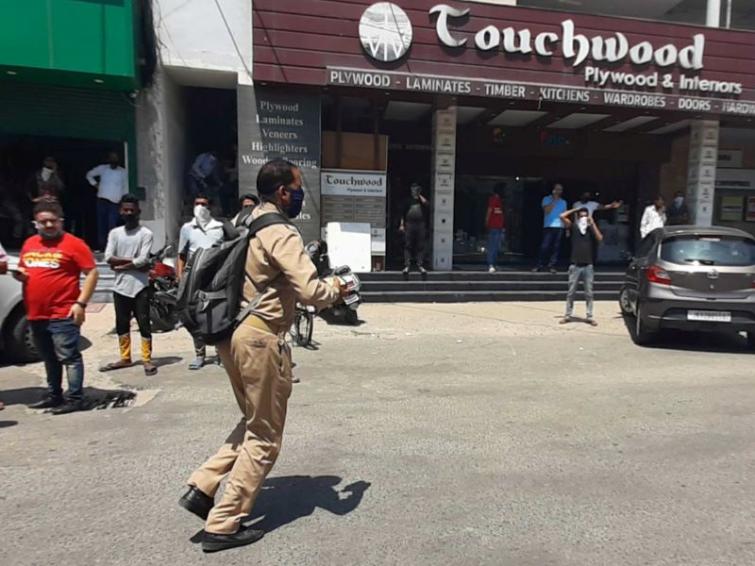 A large number of customers early morning on Thursday lined up outside wine shops in Bus Stand, Trikuta Nagar, Lower Muthi, Channi and Gandhi Nagar localities to purchase liquor as wine shops opened almost after a gap of nearly 50 days.

However, huge rush of purchasers outside shops also defied social distancing amid the presence of police personnel on duty.

“People stood in line since morning but at many places where the wine shops were functional, chaos prevailed following which, we were left with no other option than requesting the traders to down the shutters,” a senior police official said.

An official of Jammu and Kashmir Excise Department said that out of total 220 shops in the Union Territory, only 40 shops were allowed to operate and six of them were in Jammu district.

Pertinent to mention here that the J&K Government has also hiked 50 per cent excise duty on sale of liquor and despite that, huge rush of tipplers was witnessed out the shops.

"The guidelines issued by the Chief Secretary were violated today because all shops in the orange zone were allowed to function," J&K Wine Traders Association expressed.

They said that the Jammu District Administration was of the opinion that opening all wine shops would have helped in maintaining social distancing and prevented crowding but the department’s decision of opening only “selected” shops is not a welcome step and allegedly played a spoilsport in government’s effort of controlling COVID-19 spread.

"We were already of the opinion that government should not consider only stand alone shops to prevent this situation," they said, adding that with the opening of liquor shops on Thursday, the two-month long fight against coronavirus by police, doctors and all others engaged in fighting the pandemic, will become a futile exercise if new cases increase due to flouting of social distancing norms in liquor shops.

"The four-member working committee of the wine traders association had also given in writing to the administration the steps for social distancing and adherence to the guidelines laid, but the situation after the wine shops opened this morning was absolute violation of the lockdown norms," they added.