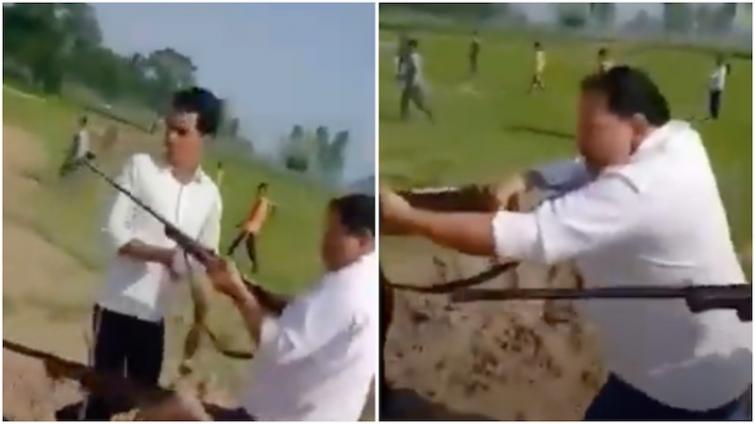 Sambhal/IBNS: A leader of Samajwadi Party (SP) and his son were shot dead in broad daylight on Tuesday at Sansoi village under Bahjoi Police Station limits in Sambhal district of Uttar Pradesh.

The entire incident was caught on camera and later the video went viral on the social media, reports said.

According to reports, the dual murder was likely due to a disagreement over constructing a road under the Mahatma Gandhi National Rural Employment Guarantee Act (MGNREGA).

The two-minute-30-second long video clip of the incident shows that one of the two rifle-clad men shot bullets from point-blank range aiming at SP leader and pradhan of Sansoi village, Chhote Lal Diwakar, and his son Sunil Diwakar during an argument on the village road.

It was also seen in the footage that the party leader and his son immediately fell on the ground after sustaining bullet injuries.

Later, a heavy police force rushed to the area while senior police officials, including IG of Moradabad Range, Ramit Sharma, and Sambhal SP, Yamuna Prasad, inspected the scene where the double murder were committed.

"After registering an FIR with Bahjoi Police Station, we have constituted three teams to probe the double murder while both the bodies have been sent for post-mortem," Sambhal SP Yamuna Prasad said.

"We have detained few persons in connection with the matter and currently they are being questioned while our operations to arrest the main accused persons, who have been absconding since the incident, are currently underway. Further investigation is on," the senior police official said.

Meanwhile, expressing his indignation over the murders of Samajwadi Party leader and his son in Sambhal, SP's national president and former UP CM Akhilesh Yadav alleged that the law-and-order situation in the state has been completely destroyed during the ruling BJP regime.

"The supporters of ruling BJP have been persecuting the leaders and workers of the Samajwadi Party for the last three years and there is no restriction on crimes in the state, even during the lockdown when police are stationed everywhere ," Akhilesh Yadav said.

"The murder of innocents has become a daily occurrence in UP during the BJP regime, from western Uttar Pradesh to Purvanchal, morale of criminals has increased," Yadav added.