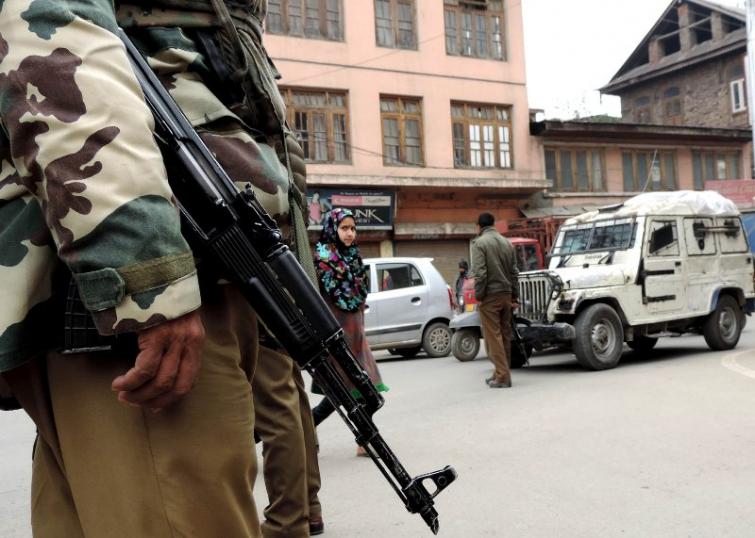 New Delhi/IBNS: Over a 100 dignitaries, including academicians, bureaucrats, vice-chancellors, Olympians, retired defence personnel have written an open letter to the administrator, board and jury of Pulitzer Prize 2020, for endorsing terror and seperatism in India, media reports said.

Veteran photojournalist from Jammu Kanwal Anand, popularly known as 'Channi Anand', and Mukhtar Khan, and Dar Yasin - of the Associated Press were given the 2020 Pulitzer Prize on May 5 in the Feature Photography category for their coverage on Kashmir post the abrogation of Articles 370 and 35A.

Associated Press photographers @daryasin, Mukhtar Khan and Channi Anand found ways to let outsiders see what was happening. Now, their work has been honored with the 2020 Pulitzer Prize in feature photography. https://t.co/0Nf4FMG4xn

The dignitaries have objected to the Pulitzer awarded to photojournalists from Jammu and Kashmir and the citation that came with it, saying it has endorsed fake news and terror in India.

The letter begins with an attack on the citation of the Pulitzers awarded to the three photojournalists:"Your website mentions the names Channi Anand, Mukhtar Khan and Dar Yasin of Associated Press for the Pulitzer prize with a citation - 'For striking images of life in the contested territory of Kashmir as India revoked its independence, executed through a communications blackout,'"

"To begin with, by using the term 'Contested territory' for 'Kashmir', you exposed yourself by showcasing your poor knowledge and understanding of historical facts related to Jammu-Kashmir. The usage of the term like 'Contested territory' is an attack on the Sovereignty and Integrity of India and disrespect to the Constitution of India because Jammu Kashmir is an integral part of India and there is no dispute about it."

"Read the ancient history of India, and you will find that this state has been one of the most prominent parts of India for the last several centuries. Walter W. Lawrence in 'The Valley of Kashmir' wrote, "Kashmir can claim the distinction of being the only region of India which possesses an uninterrupted series of written records of its history, reaching back beyond the period of the Mohammedan conquest and deserving the name of real chronicles," it adds.

The letter also states that the citation is a “deliberate attempt to project India in a bad light”.

“When you write ‘India revoked its (Kashmir’s) independence, executed through a communications blackout’, it is nothing but again a demonstration of lack of knowledge or deliberate attempt to project India in a bad light. If the communication of an area is restricted temporarily for security reasons, how can it be interpreted as ‘revoking independence’ of that area!!” the letter states.

“Either you do not understand the meaning of Independence, or you are intentionally trying to create sensational news and pat your backs for supposed courage. Is this the ‘excellence’ you stand for? Also, remember you are referring to that state of India, which has been a victim of Pakistan-sponsored terrorism and propaganda for almost forty years.”

“Both the civilians and the security personnel have suffered heavy losses due to terrorism in J&K,” the letter adds. “Thus, anything that is directly or indirectly supporting the separatist and the divisive agenda of Pakistan is also supporting terrorism in the region, and we are sure you do not wish to support terrorism as Americans! It is appalling to see an organisation like yours that claims ‘Honouring Excellence in Journalism and the Arts‘ making such a mistake.”

The letter also specifically mentions Mukhtar Khan and Dar Yasin, terming their work “full of venom against their own country, people and police”.

"The purpose of the Pulitzer Prize is to encourage free journalism. Ironically, by giving the prize to photographers like Dar Yasin and Mukhtar Khan, you are promoting journalism and photography of lies, misrepresentation of facts, and separatism. We have not included the name of Channi Anand here because his photo does not malign India and unlike the other two photojournalists, it does not use the term 'Indian controlled Kashmir.' What we find more shocking is that before conferring this prize, you did not even bother to check whether these reporters/photographers have been telling the truth to the world!!" it reads.

“The purpose of the Pulitzer Prize is to encourage free journalism. Ironically, by giving the prize to photographers like Dar Yasin and Mukhtar Khan, you are promoting journalism and photography of lies, misrepresentation of facts and separatism,” the letter states.

“Even the other photos by the photographers mentioned above are full of venom against their own country, people and police. Winning applause by showing a man kicking the J&K Police van, photographs of protests, violence, aggression, these photographers and AP news agency are strengthening the anti-India propaganda of Pakistan, and organisations like yours are indirectly encouraging terrorism,” the letter states.

“By supporting those who are spreading such fake news, you are defaming the Pulitzer Prize and promoting journalism of lies, deceits and misrepresentations. It is a shame that a prize that claims to be for ‘progress and elevation of journalism’ is promoting hatred, division and falsehood.”

“The hereditary ruler of the Princely State of Jammu Kashmir, Maharaja Hari Singh, had signed the Instrument of Accession to join the dominion of India on October 26, 1947. This IOA was signified by the then Governor-General, Lord Mountbatten,” it states. “Thus, by following the legal procedure, created and endorsed by the British government, the Congress and the Muslim League, Jammu Kashmir became an integral part of Indian Union. To understand the process of territorial integration, please read historical and legal documents pertaining to the Constitution of India,”it stated flaying the Pulitzer board.

Quoting the Constitution in this context, it states, “The Indian Constitution was framed by the elected representatives of people of India, including four representatives from Jammu & Kashmir, (for your kind information Sheikh Abdullah, grandfather of Omar Abdullah, former chief minister of J&K, was also a part of this team)."

“Schedule 1, Article 1 of the Indian Constitution clearly stated that Jammu Kashmir is a state of Union of India and from October 31st 2019 it is declared as Union Territory of Jammu Kashmir & Union Territory of Ladakh. No other country in the world has ever claimed Jammu-Kashmir to be a part of their territory, nor can any country make such a claim. All the people of the earlier state and currently the Union Territories, carry Indian passport and have citizenship of India,” it adds.