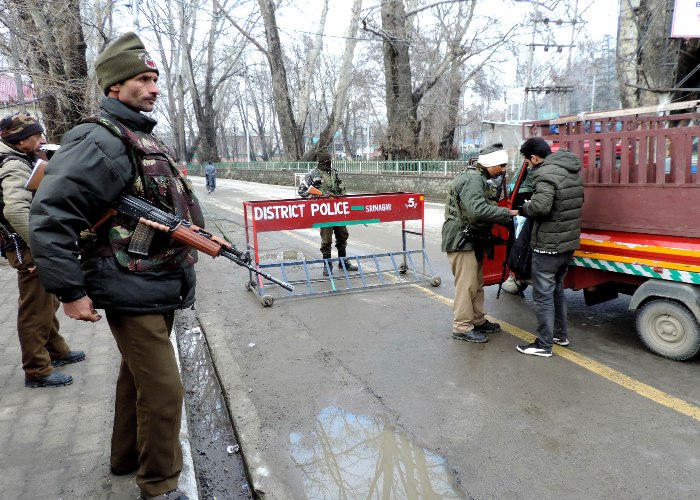 Several encounters have taken place in Jammu and Kashmir even at this time of crisis when the nation is fighting against the disease that has claimed 1306 lives.

Two senior Indian Army personnel-a colonel and a major-were martyred during an encounter with terrorists in Kupwara District in Jammu and Kashmir which began on Saturday. A police officer and two army soldiers were also killed when the security personnel came under heavy fire, said reports.

Two terrorists were also killed in the Handwara area of the district in north Kashmir.

During the joint operation with the Jammu and Kashmir Police, the Indian army recovered weapons and warlike stores.

Official sources said that following specific information about presence of militants, a joint Cordon and Search Operation (CASO) was launched by Special Operations Group (SOG) of J&K police, Army and CRPF at Chanjmullah in Handwara.

"Based on the intelligence input that terrorists were taking the civilian inmates of a house in Changimulla, (in the) Handwara (area) of Kupwara district, hostage, a joint operation was launch by Army and JK Police. A team comprising of five Army and JK Police personnel entered the target area occupied by the terrorists to evacuate the civ (civilians)," a statement read.

“The information is that these attacks could be suicide missions and target bases of the army and paramilitary forces in Jammu and Kashmir,” a top counter-terror official in Delhi toldHindustan Times on Saturday.

Jaish-e-Mohammed founder Maulana Masood Azhar, who has been reported to be terminally ill, has been out of action for several months. His younger brother, Mufti Abdul Rauf Asghar has been running the show at the terror factory and is reported to have been personally involved in planning the multiple terror strikes, he said.

On Saturday, according to information available with Indian intelligence agencies, Mufti Abdul Rauf Asghar also had a scheduled meeting with officials of Inter Services Intelligence at Rawalpindi on the outskirts of Pakistan capital Islamabad, reported the Indian newspaper.

“I would surmise that Mufti Abdul Rauf Asghar’s meeting with his handlers is about the May 11 terror strikes,” a senior security official in Kashmir told Hindustan Times.

He said the choice of May 11 for the strikes is designed to coincide with the 17th day of Ramadan when the Battle of Badr was fought and won by a few hundred soldiers in Saudi Arabia.

In Islamic history, it is seen as a huge victory in the early days of Islam and a turning point.

Intelligence officials told the newspaper the May 11 strike being planned by the Jaish was expected in view of a spike in infiltration attempts backed by the Pakistan army during the last one month. Many of them were blocked by soldiers of the Indian army and paramilitary forces. Some did succeed.

Intelligence reports indicate that more than 70 Jaish-e-Mohammed terrorists are likely to attempt infiltration over the next few weeks, many of them from the Leepa Valley, reported Hindustan Times.

“Our analysis has indicated that there is often a correlation between spikes in cross-border firing and infiltration attempts at this time of the year,” an army official told the Indian newspaper, adding that the number of ceasefire violations by the Pakistan army is expected to increase further.

On the other hand, another Indian magazine The Week in its report said the Jaish-e-Mohammed, backed by Pakistan's ISI, has started its summer terror onslaught after precision planning, with the neighbouring country gradually easing restrictions on the terror group.