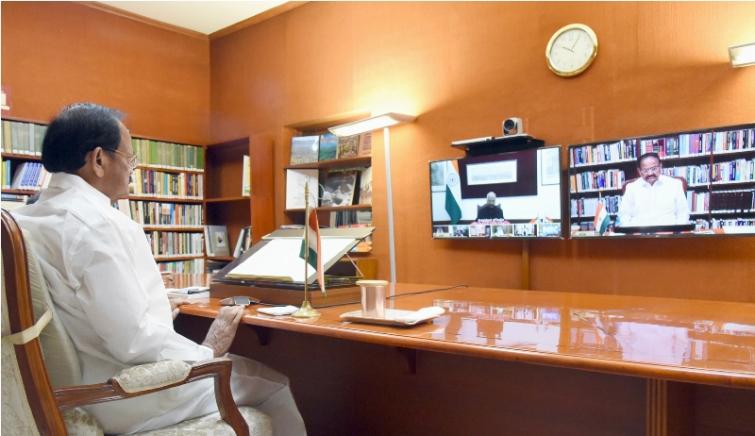 New Delhi/IBNS: Vice President of India M Venkaiah Naidu on Friday called upon the Governors and Lt. Governors of States and Union Territories to motivate spiritual and religious leaders to advice their followers to not hold any congregations and observe social distancing norms to prevent the transmission of COVID-19.

He also wanted them to focus on the arrangements made to ensure harvesting, storage and procurement of the agriculture produce in their respective States.

Addressing the Governors, Lt Governors and Administrators of States and Union Territories along with the President,Ramnath Kovind, the Vice President urged them to contact spiritual and religious leaders in their respective regions and advice them to guide their followers to strictly adhere to the guidelines on social distancing and to observe personal hygiene.

Referring to a recent avoidable action which caused widespread adverse impact across the country, the Vice President cautioned the Governors and Lt. Governors to treat it as a wake-up call.

“No religious congregations should be allowed to take place in your respective States,” he said.

Referring to the harvesting season, Naidu urged them to advise the State agencies to ensure the smooth movement of farm machinery so that the farmers did not face any hardship. He also wanted them to ensure 100 percent of the procurement of the produce.

“That is the need of the hour,” the Vice President observed.

Expressing his concern over the incidents of assault on doctors in some States, Naidu described them as unfortunate and condemnable.

He asked the Governors to sensitize the people on the crucial, life-saving role being undertaken by doctors, nurses and other frontline warriors such as sanitary staff and police personnel in the battle against COVID-19.

He said that such incidents would have a demoralizing effect on doctors and others.

Complimenting the services being rendered by them, he said the real reasons behind such attacks have to be ascertained and the people have to be made aware that the doctors and nurses were risking their own lives to save others.

He also sought to ascertain from Governors and Lt. Governors about the arrangements for conducting online courses to enable students to pursue their studies.

The Vice President also sought to know about the plight of the stranded migrant workers, the supply of essential commodities and medicines to the people. While the States and the Central Governments were doing their best in mitigating the hardship faced by the migrant labour, it was also the duty of the society at large to come to their aid in terms of providing food and shelter to them, he observed.

Lauding the people across the country for following the spirit of the lockdown, Naidu called for effective enforcement of social distancing norms. He appealed to the people to observe the norms in the same vein without any violation, deviation or dilution.

Urging the people to follow the advice given by the President and Prime Minister Narendra Modi, he also advised doctors and scientists to follow the guidelines issued by the Union Health Ministry and the ICMR.

As many as 35 Governors, Lt. Governors and Administrators of States and Union Territories gave an overview of the measures taken in their respective areas to combat COVID-19 pandemic.