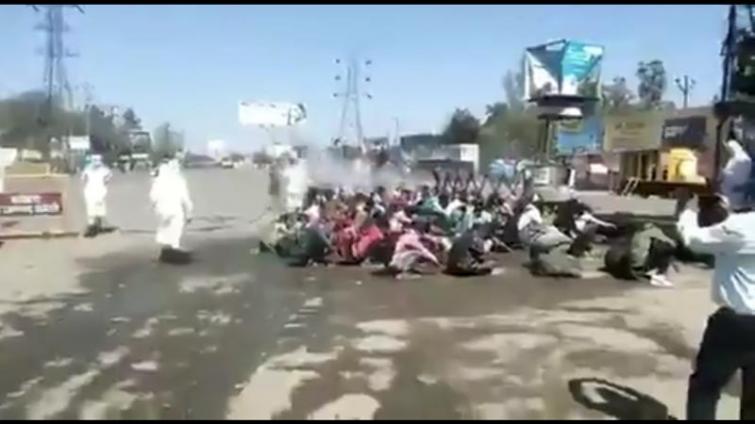 Bareilly/IBNS: In a shocking incident, migrant workers in Uttar Pradesh's Bareilly were forced to take an open bath in group allegedly with chlorinated water before their entry into the district.

The entire incident was captured in a video.

After drawing flak, District Magistrate of Bareilly, Nitish Kumar, said that he had ordered an action against officials who forced the migrant workers to take bath in the open with sanitizer solution.

India reported 1197 positive Novel Coronavirus cases till noon on Monday as the country grappled to address the plight of thousands of migrant workers who have desperately set on foot to reach their hometowns and villages hundreds of kilometres away.

34 people have so far lost their lives in Coronavirus.

As India is going through a massive 21-day lockdown, which began on last Wednesday, the migrant workers were seen crossing the state borders to reach their homes though the central government has repeatedly urged people to stay whereever they were to stop the spread of COVID-19.

According to media reports, at least 22 migrant workers including their kins have lost their lives in their efforts to reach home during the lockdown which has exempted essential services like grocery shops, pharmacies, banks, ATMs and media.