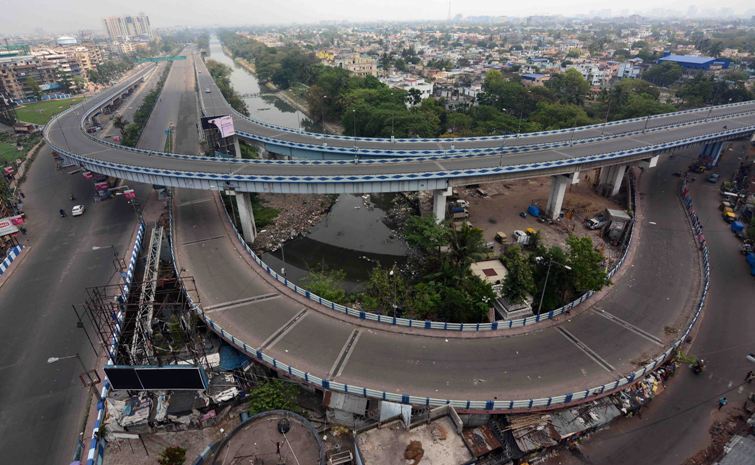 New Delhi/IBNS: India on Thursday witnessed the second day of nationwide lockdown of its 1.3 billion people to fight the spread of coronavirus pandemic as the death toll from the deadly virus touched 16  with an official tally of  697 infected cases so far.

The John Hopkins live tracking website, however, puts the number of positive cases in India at 719. So far 45 people have recovered from the virus infection.

With people largely responding to Prime Minister Narendra Modi's appeal for staying at home, the bustling Indian streets were mostly empty except movement of essential services.

People wearing masks in neighbourhoods across Indian cities and towns ventured out in small numbers to buy food items and other essentials from the shops which were open amid a police crackdown on violators of the lockdown restrictions.

Many complained of police high-handedness and baton-charging with social media abuzz with viral videos of either cops beating up violators or dismantling vegetable carts.

Many heeding to the lockdown rules, also posted and shared videos of "irresponsible citizens" violating the diktats to endanger everyone's lives. 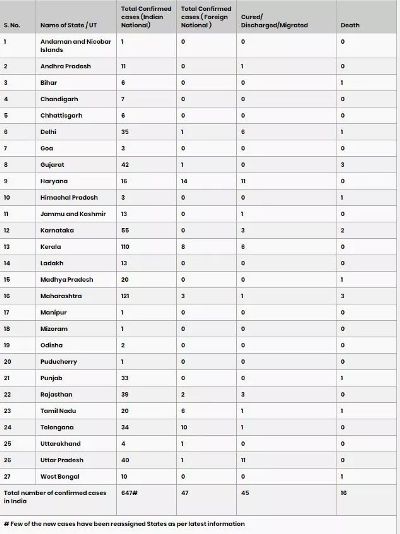 Meanwhile, providing relief to the poor section, Union Finance Minister Nirmala Sitharaman on Thursday came out with a mega package of Rs. 1,70,000 crore under "Pradhan Mantri Gareeb Kalyan Scheme" to support health workers, farmers, women and other marginalised sectors as the country is in lockdown mode to combat COVID-19.

Each health worker will get insurance of Rs. 50 lakh for the next three months.

Announcing that all poor people will get five kg of wheat or rice and one kg of dal for free for the next three months, Sitharaman said, "We have taken the steps so that no one remains hungry."

Sitharaman said eight lakh farmers will get Rs. 2,000 to their bank accounts. 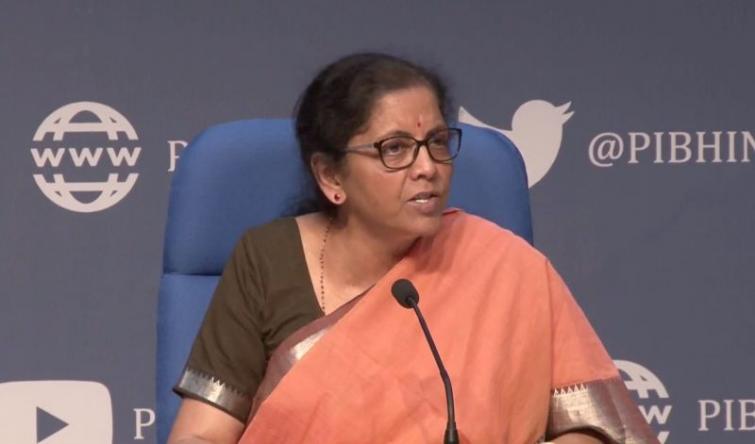 She has also announced a wage increase from Rs. 182 to Rs. 202 for all MNREGA workers.

One-time ex-gratia of additional Rs. 1000 will be given to poor senior citizens who are widowed and disabled.

While 1.3 people are witnessing the lockdown, news has also emerged that several people are facing police beatings across the country.

Video of police punishing those who violate curfews and ignore restrictions on movements have gone viral.

In one video from western Uttar Pradesh's Budaun town, a group of young men was forced to hop down the main road with bags strapped to their backs.

Reports said they were migrant workers returning to their home town. However, the police did not listen to their pleas and rather humiliated them as violators.

"The policeman seen in the video is a probationer with about a year of experience. Senior officers were present but manning other spots. Corrective action will be taken. I apologise for the video and am ashamed about what happened," AK Tripathi, the Budaun police chief, told NDTV.

In Jammu and Kashmir, police were seen stamping on the forehead of lockdown violators. 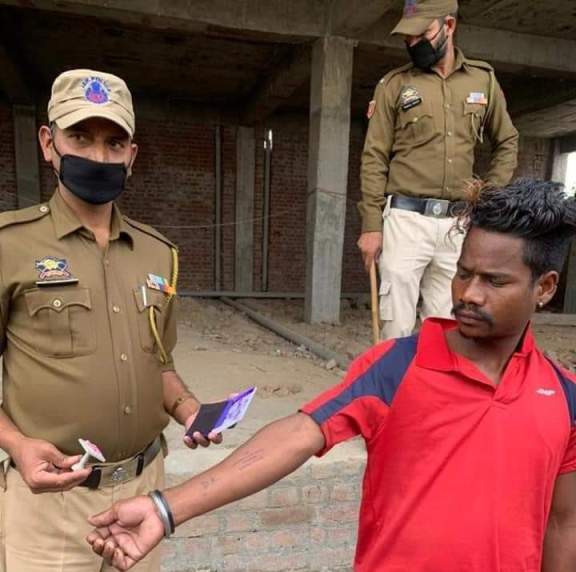 In West Bengal, a 32-year-old man died allegedly after being beaten up by policemen during coronavirus lockdown at Banipur Rajgung area under Sankrail Police Station limits in Kolkata's neighbouring Howrah city on Wednesday night, reports said.

The police, however, denied the charge.

Wife of the man, who has been identified as Lal Shami, alleged that he went to a nearby market to buy milk for his baby when police were lathicharging lockdown violators at the area and he was mercilessly beaten up by the police force.

Since Prime Minister Narendra Modi imposed nationwide 21-day lockdown in the wake of novel coronavirus and directed the state administration to strictly enforce the restrictions, police in West Bengal have been going hard on the lockdown violators and lathicharging them.

There have been also instances of police urging people to stay indoors, wear masks during their venturing out and also checking vehicles to ascertain their reasons for coming out.

In a positive measure, the Delhi government on Thursday allowed the operation of food home delivery services during the 21-day lockdown.

"Food home delivery services have been allowed, the delivery persons can show their ID cards that will be sufficient," announced Delhi Chief Minister Arvind Kejriwal. 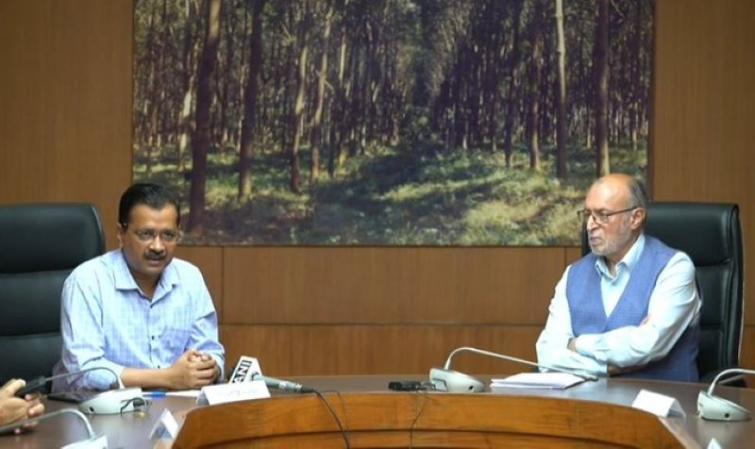 The Centre on Thursday extended the ban on the landing of all international commercial flights in India till April 14 to prevent the spread of novel Coronavirus.

In a fresh travel advisory, the Centre stated: "It has been decided that all scheduled international commercial passenger services shall remain closed till 1830 hours GMT of April 14, 2020." 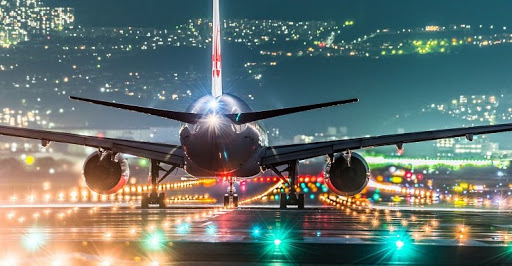 Prime Minister Narendra Modi in his national address on Tuesday (March 24) announced a 21-day lockdown warning all against venturing out and inviting the virus to home.

The lockdown has started at midnight on Mar 24 and will be effective till Apr 14 midnight.

During his address, the Prime Minister had said, "During these 21 days, forget about venturing out. You all have to stay at home no matter what happens in your lives. This is the only one way we can save our people, country and ourselves." 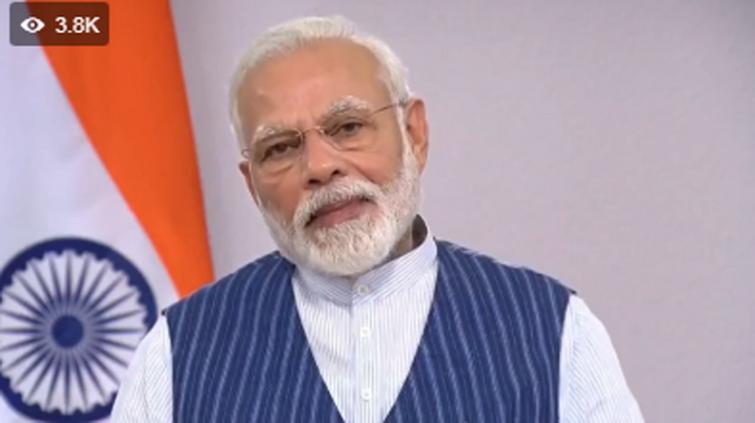 "If you venture out during these 21 days, the country might have to pay a huge price for it," he told the nation.

However, Modi said all essential services including pharmacies, banks, ATMs will function urging people not to "panic."