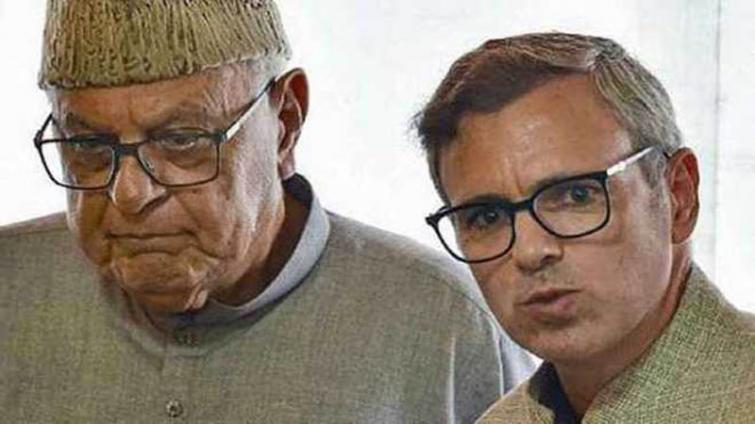 Dr Abdullah, a former chief minister and MP from Srinagar, drove from his residence to nearby Hari Nivas in Srinagar, where Omar Abdullah remained under custody under PSA since August 5, when the Centre abrogated Article 370 and bifurcated the state into two Union Territories.

Official sources said that Mr Abdullah had sought permission from the J&K administration to meet his son. 'The father-son duo stayed together for about an hour,' they said.

After his release from detention, Dr Abdullah on Friday visited his father Sheikh Abdullah's grave and offered players.

The NC MP from Srinagar, who was accompanied by his wife Moile and other family members, offered players at the grave of his father situated on the bank of Dal Lake in Hazratbal.

Dr Abdullah could not visit the grave of his father on his death anniversary on December 5, 2019 as he was detained under Public Safety Act (PSA).

Jammu and Kashmir administration on Friday revoked detention of Dr Abdullah after over seven months. The revocation of detention of the former chief minister comes just two days after Public Safety Act (PSA), which was slapped on him in September last year, was extended for another three months on March 11.

'In exercise of powers conferred under Section 19(1) of the Jammu and Kashmir Public Safety Act, 1978, the government hereby revokes the detention order bearing No DMS/PSA/120/2019 issued by District Magistrate, Srinagar,' a statement issued by the J&K administration said.

However, the NC president was booked under Public Safety Act (PSA) on September 15, 2019 when MDMK chief Vaikoo approached the Supreme Court (SC), seeking directions to the government to allow Dr Abdullah to attend a peaceful and democratic annual conference in Chennai. The Gupkar residence of Dr Abdullah was turned into a jail for him and a large number of security force personnel remained deployed there.