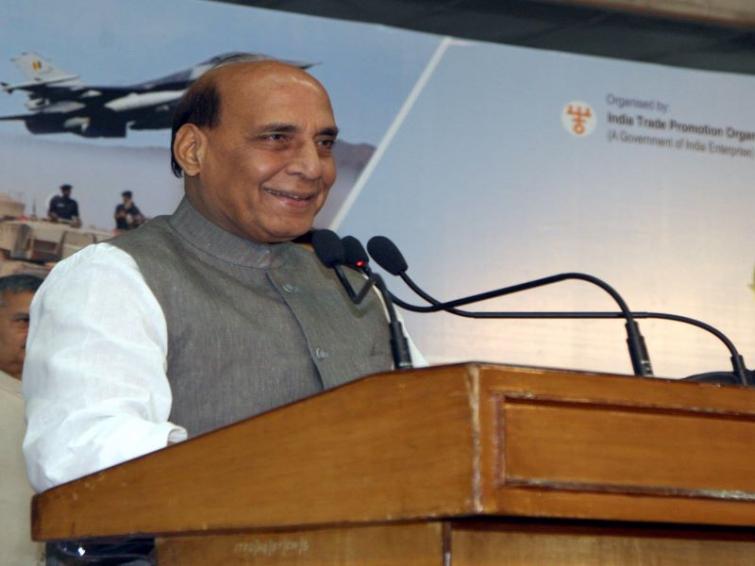 Bengaluru/IBNS: Defence Minister Rajnath Singh on Thursday said India plans to more than double its annual defence exports to Rs 35,000 crore in the coming years from the existing Rs 17,000 crore.

"India's defence exports have crossed Rs 17,000 crore in the last two years and Rs 35,000 crore exports target has been set for the coming years. I am confident that Hindustan Aeronautics Limited(HAL), through its various platforms, will contribute significantly in achieving this milestone," said Rajnath Singh while inaugurating the new LCH Production Hangar at Helicopter Division with HAL.

Singh lauded HAL's performance amid stiff competition by private defence companies. "HAL has excelled both in operations and finance in the last five years with a turnover of Rs 19,705 crore till March 2019 and gave shareholders a healthy dividend of 198 per cent. It has achieved operational clearance on seven platforms, including Light Combat Aircraft and Light Combat Helicopter, and overhauled platforms like Hawk and SU 30 MKI,” he pointed out.

Speaking on the occasion, R Madhavan said that LCH is completely ready for operational induction and Helicopter Complex fully geared up for the production.

He said that the techno Commercial Proposal for 15 Limited Series Production (LSP) helicopters has already been submitted by HAL in March 2018 and the order is awaited.  The total projected requirement is for around 160 helicopters.

HAL apprised Defence Minister on the progress of new design and development program of indigenous Indian Multi Role Helicopter (IMRH). The full scale mock-up was showcased to the Minister.

The IMRH (for IAF, Navy and Army) is proposed as a replacement to the existing medium lift helicopters such as Mi17’s, Kamovs and Seakings which will phase out in the next eight to ten years and HAL is keen to complete the development of IMRH during this time. Induction of indigenous IMRH will result in considerable savings of foreign exchange. Preliminary Project Report (PPR) for Development has been submitted to MoD for sanction of funds by CCS.rfr

LCH is a 5.5 ton class combat helicopter designed and developed by HAL.  It is powered by two Shakti engines and inherits many technical features of the Advanced Light Helicopter.  The features that are unique to LCH are sleek and narrow fuselage, tri-cycle crash worthy landing gear, crash worthy and self-sealing fuel tanks, armor protection and low visibility features which makes it agile and survivable.

The helicopter has the distinction of being the first attack helicopter to land in Forward Bases at Siachen, 4700 mts above sea level with 500kg load.  As part of development, four LCH prototypes have been built and extensively flight tested with over 1620 cumulative flights (1239 flight hours).  LCH received Initial Operation Clearance (IOC) on August 26, 2017, in the presence of the Defence Minister.