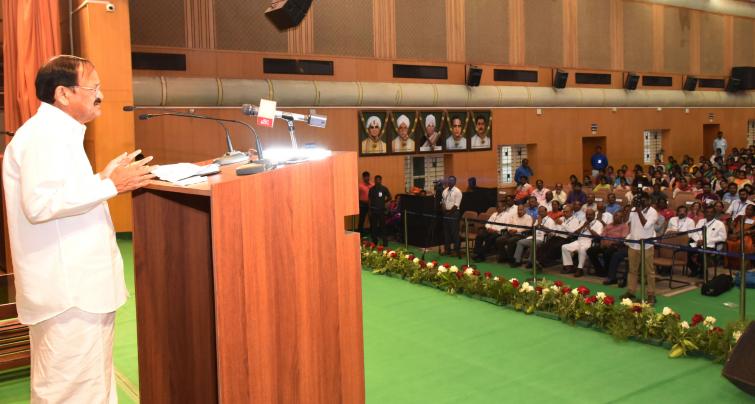 Violence not acceptable in a democracy: Venkaiah Naidu

New Delhi/IBNS: Vice President of India M Venkaiah Naidu today said that violence was not acceptable in a democracy and observed that those encouraging violence were doing at the cost of the nation.

Addressing students and faculty of PSG institutions at Coimbatore today, the Vice President said that dissent was essential in a democracy but not disintegration. Stating that protests have to be conducted in a peaceful and democratic manner, he said “No one can speak against the unity and integrity of the country”.

The Vice President called for an education system that upholds India’s values, ethics and makes the students aware of our rich cultural heritage and history. He said that children should be taught the life histories of great personalities such as VeerapandiyaKattabomman, V. O. Chidambaram Pillai, Subramania Bharathi, PasumponMuthuramalingaThevar to inspire them.

Stressing the need for preservation and promotion of Indian languages, Naidu called for providing primary education in the child’s mother tongue. He also appealed to people to use their mother tongue at home and in their communities.

Naidu urged people to first study and understand the CAA legislation. It has nothing to do with Indian citizens and it pertains to refugees who have been persecuted on religious grounds in neighboring countries, he said.

Referring to revocation of Article 370 and Reorganization of Jammu & Kashmir State, he said that Article 370 was a temporary provision and it was revoked after a thorough debate in the Parliament.

Referring to the comments being made by certain countries on revocation of article 370 and other issues, Shri Naidu said that they should mind their own affairs and should stop commenting on India’s internal matters.

The Vice President reminded the students that India was once known as Vishwaguru and was the global hub of knowledge with students from all corners of the world studying at Nalanda and learning centres of excellence.

Naidu asked the youth to shun negativism and adopt a constructive and positive approach towards life and strive to make India Vishwaguru once again.

Observing that there was no dearth of talent or skills among the youth of the country, Shri Naidu said that several reputed multinational organizations such as Microsoft, Google are being headed by Indians.

Calling upon both the government and the private sector to ensure access to quality education at affordable rates to students, particularly from the downtrodden and marginalized sections, he said that education alone has the power to bring about a change in lifestyles and empower people.

Naidu also stressed the need to leverage the huge demographic opportunity in the country with 65 percent of the population below 35 years, the Vice President said that the youth must be trained to create employment as well as entrepreneurial opportunities and make India the global hub of human resource.

Describing the founder of PSG institution, Shri PS Govindaswamy Naidu as a visionary and compassionate human being, the Vice President appreciated his act of dividing his properties into four parts even as he had only three sons. He kept the fourth portion for charitable deeds. The country needs more and more such organizations that help the poor and the marginalized sections, the Vice President said.