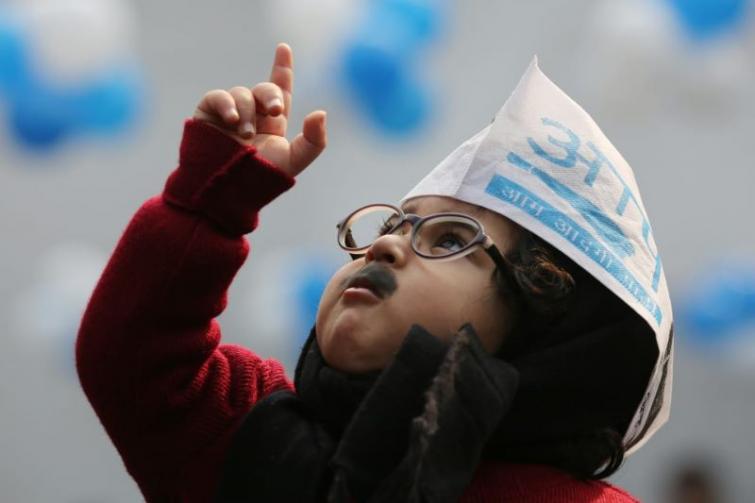 New Delhi/IBNS: A one-year old child, whose picture went viral on Tuesday after the Aam Aadmi Party (AAP) registered a landslide victory in Delhi, has been invited by the outfit to Arvind Kejriwal's swearing-in ceremony which will be held on Feb 16.

Couple of days ago when the AAP was sweeping the Delhi assembly elections, a picture of the child named Avyaan Tomar, who was wearing a muffler and spectacles like Delhi Chief Minister Arvind Kejriwal, went viral on social media in no time.

The Delhi's ruling party took to Twitter to announce, "Baby Mufflerman is invited to the swearing in ceremony of @ArvindKejriwal on 16th Feb. Suit up Junior!"

Baby Mufflerman is invited to the swearing in ceremony of @ArvindKejriwal on 16th Feb.

In early days of his politics, Kejriwal's trademark style was a muffler during winter season. Several memes and jokes also used to float on social media regarding Kejriwal's muffler.

Of late, Kejriwal is seen without muffler during winters. His choice to not use mufflers is often referred to as an "image makeover" by political analysts.

In the Delhi polls, the AAP swept the national capital by winning 62 of 70 seats decimating the challenger Bharatiya Janata Party (BJP) which could win just eight seats while the Congress drew a blank.

Kejriwal will take oath as the Chief Minister for the third straight terms on Sunday.

Unlike other regional parties, the AAP has not invited any Chief Minister of political leader from other states to the swearing-in ceremony.