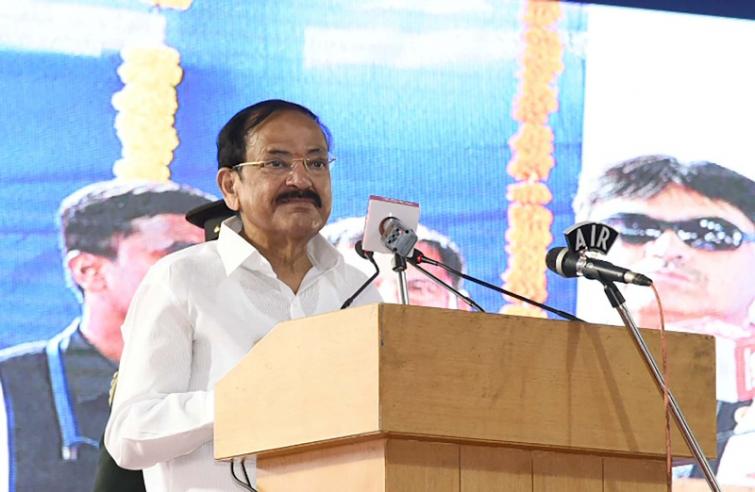 India will not accept any outside interference in its internal matters: Vice President Naidu

New Delhi/IBNS: Vice President of India M Venkaiah Naidu today asserted that India would not accept any outside interference in its internal matters. He stressed that the safety, security and integrity of India are non-negotiable.

Addressing participants of Kautilya Fellows Programme (KFP) organized by India Foundation, he said that the reorganization of Jammu and Kashmir State into two union territories of Jammu & Kashmir and Ladakh was meant to fast-track the development of the region.

Pointing out that India believes in the philosophy of Vasudhaiva Kutumbakam that treats the whole world as one family and that it believes in sharing knowledge and wisdom, the Vice President said that this very ideal had shaped its interaction and outreach.

He said that the same philosophy guided India’s external relations with other countries, both near and far. Bemoaning the attempts of one of India’s neighbors to promote cross-border terrorism by aiding, abetting and funding terror, Naidu said that India always believed in peaceful co-existence with all its neighbors. He said that India was never an aggressor and never attacked any country.

Describing the menace of terror as the enemy of entire humanity and that it has nothing to do with religion, Naidu said that mixing of religion with terror was problematic.

The Vice President urged the world community and multinational organizations such as the UN to conclude discussions on the Comprehensive Convention on International Terrorism proposed by India which has been pending before the UN since 1996. He said that it was the duty of the world community to put an end to terror in all its forms and manifestations.

Stating that secularism was ingrained in the DNA of all Indians’ because of its age-old civilizational values, Shri Naidu said all minorities were safe and secure in India.

Naidu said that despite the global economic slowdown, India continues to be one of the fastest-growing economies in the world and is poised to become the third-largest economy if the series of reforms were continued at the same pace.

Naidu said that India with its tremendous youth population could become the global hub for Human Resources.

He opined that the programs like Make in India, Digital India, and Skill India were empowering the youth and creating enterprises.

“If we manage to educate and skill our vast youth population, we can very well become a global business hub,” he added.

Vice Admiral Shekhar Sinha, member of the Board of Trustees, India Foundation and Shri Ram Madhav, member of Board of Governors and more than 100 participants of Kautilya Fellows Programme attended the event.