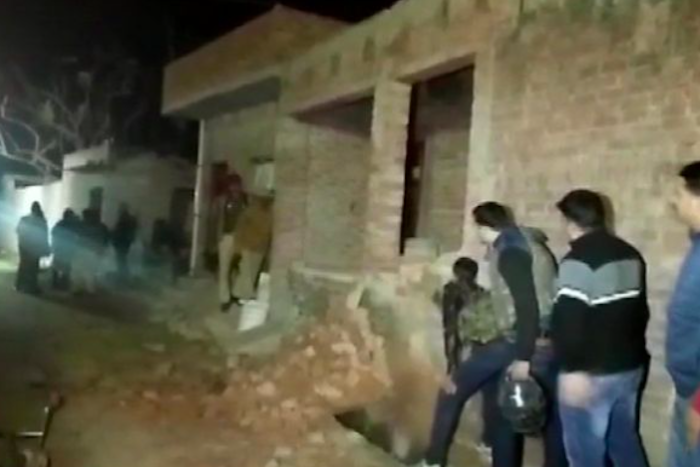 Farrukhabad/Uttar Pradesh/IBNS/UNI: Police have shot dead a man in West Uttar Pradesh's Farrukhabad district and rescued 23 children whom he had held hostage along with his wife and his one-year-old daughter, ending a 10-hour-long ordeal of the victims, officials said late in the night.

Media reports said police tried to talk with the man, who was a murder accused out on bail, but failed and hence had to shoot him down.

All children have been safely rescued and the man was shot dead, a senior police official told mediapersons.

However, a one-year-old child who was among the 23 held hostage, was released by the main before he was gunned down.

Earlier reports said, police took precautions to rescue the children under 10 years age along with some women ,who have been taken into hostage by the man in his house at Kasaria village under Mohammadabad police station area on Thursday.

Before he was shot dead, a letter was also given by the accused along with the released child on the name of the District Magistrate alleging that the gram Pradhan was not allotting him Pradhanmantri Awas and toilet project due to which his ailing mother and other family members are facing problem.

Anti Terrorist Squad (ATS) sleuths had reached the spot and they used drone to know the whereabouts of the house and other details.

On the other hand taking no chance, UP police had also sought the help of NSG to rescue the children.

UP chief minister Yogi Adityanath held an emergency meeting in Lucknow and directed the police to rescue the children without any damage at any cost.

The criminal identified as Subhash Batham took the children hostage when they had come to celebrate his one year old daughter's birthday.

The children reached the house at around 1400 hours to celebrate the birthday of his daughter but he took the children hostage and locked them in a room.

Batham was a murder convict and was released from jail on bail from a high court. Again a few month back he was sent to jail in a theft case.

Eye witness said when some local people tried to get the door open, he started firing from inside in which one person and two policemen were injured. Batham even hurled a low-intensity bomb from the window. He allegedly shouted that he had been wrongly framed in a criminal case.

However the accused asked people to talk to him but when anyone came near him he opened fire. Even his demand to call local BJP MLA Nagendra Singh was also met ,but he could not pacify Batham.

IG Kanpur Mohit Agarwal had also rushed to the spot.

DGP OP Singh said a special team of trained security personnel is at the spot and we have kept NSG commandos on standby.