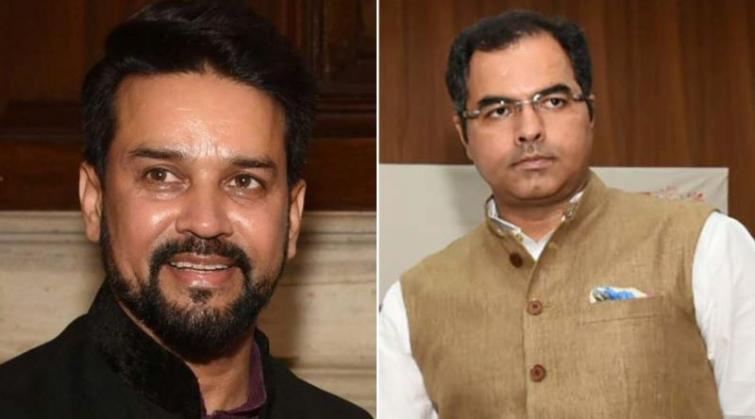 New Delhi/IBNS: The Election Commission (EC) on Wednesday ordered the removal of Union Minister Anurag Thakur and Lok Sabha MP Parvesh Verma as the Bharatiya Janata Party (BJP)'s star campaigners over their controversial remark in the run-up to the Delhi assembly elections which will be held next month, media reports said.

The order came a day after the EC issued showcause notices to the two BJP leaders.

Verma courted a row on Tuesday by saying the protestors at Delhi's Shaheen Bagh will enter into homes and rape women.

Referring to the dark days of ethnic cleansing of Kashmiri Pandits from Jammu and Kashmir, Verma told ANI, "These people had raped Kashmiri Pandits in Jammu and Kashmir... Now they have come to Delhi. They will enter the houses of Delhi and rape daughters, sisters. People of Delhi must keep all these things in mind because Narendra Modi and Amit Shah will not be there to save them at that time."

Prior to that, Lok Sabha MP from West Delhi on Monday said all mosques in his constituencies will be demolished if the BJP comes to power in Delhi which will go to polls on Feb 8.

All protestors from Shaheen Bagh will be removed within an hour if BJP comes to power, Verma had said.

Thakur on Monday courted a row by giving a call to "shoot the traitors" while lashing out at the Shaheen Bagh protestors.

The Union Minister of State for Finance and Corporate Affairs, during a rally in poll-bound Delhi a day ago was heard giving slogans, "Desh ke gaddaron ko (the traitors of the country)," to which people in the crowd responded saying, "goli maaro sa**o ko (shoot them down)".

Earlier BJP candidate from Delhi's Model Town constituency, Kapil Mishra, was barred by the Election Commission from campaigning for 48 hours after he had compared the upcoming assembly elections with a fight between India and Pakistan.