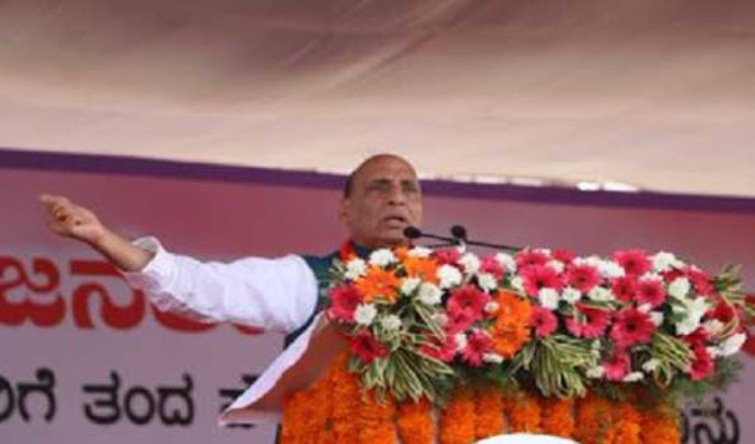 Congress is the reason for amending citizenship act: Rajnath Singh

Mangaluru/UNI: Union Defence Minister Rajnath Singh on Monday said that the Congress was the reason behind bringing an amendment to the Citizenship Act.

Addressing pro-Citizenship Amendment Act (CAA) rally organised by the BJP at Goldfinch City, Singh said, "Congress is the main reason bringing an amendment to citizenship Act. Congress leaders divided India based on religion, not the BJP."

He further said Mangaluru has played a major role in bringing BJP to power in Karnataka and made the whole country to talk about this city.

"In 2014, people of Mangaluru and Dakshina Kannada voted for the BJP and brought it to power, now in 2019 once again with your support, the BJP has come to power in the state and the centre. I would like to wholeheartedly thank the people of Mangaluru," Singh said.

“We claimed that we would abrogate Article 370 in our manifesto, we kept our promise,” said the Defence minister.

He claimed that all the promises made by BJP in the election manifesto were fulfilled and CAA also part of it.

He added that the Congress divided the country into India and Pakistan.

The same had said by Mahatma Gandhi.

"This act of CAA will not affect anybody and those who come from Pakistan and Bangladesh, most of them are Dalits, and for them, this act has been implemented," he clarified.

Digging at the Opposition parties, he said that they have been using this act as a tool for their political gains.

On the Kashmir Pandit issue, he said no power can now stop them from returning to Kashmir.