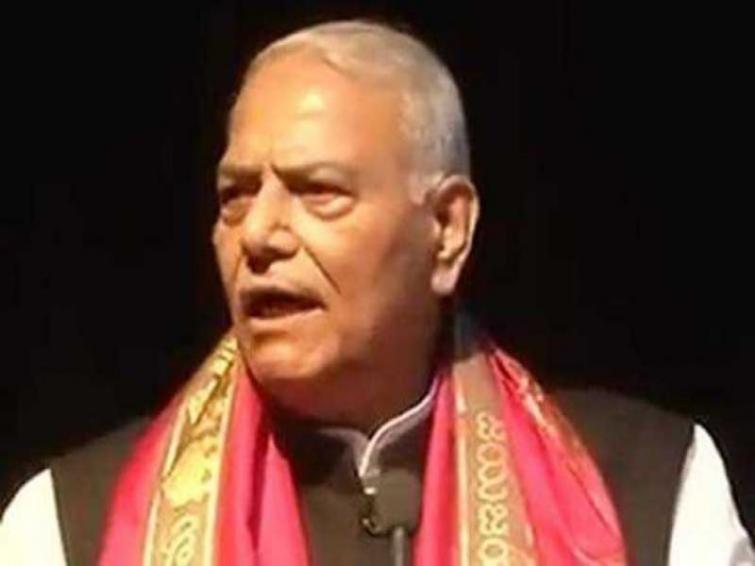 Lucknow/UNI: Terming the Citizenship Amendment Act(CAA) 'totally anti-Constitution', former Union minister and a strong critic of the BJP government Yashwant Sinha on Monday said that the law was brought in to divide the society in the names of Hindu and Muslim.

"The only motive of this law is to divide the society on communal lines and trigger fire in the country," he said while demanding an immediate withdrawal of this black law.

Addressing a press conference here along with Samajwadi Party president Akhilesh Yadav at the SP state headquarters, Sinha, a former BJP man, said that the statement of Home Minister Amit Shah announcing that the CAA would not be withdrawn at any cost, is itself an anti-democratic version.

"Shah's statement that CAA would not be withdrawn even after protests vindicates that the government was working against the citizen. The government already has the power to give citizenship but what is the reason for bringing this new law is yet to be understood," he said claiming that by bringing in such anti-constitutional law, the government was trying to divert the attention of the people from economic slowdown and unemployment.

He said that rules of the new CAA has not been formulated yet so how it will be implemented. "The law says that the minorities in Pakistan, Bangladesh and Afghanistan if harassed on the basis of religion can apply for the Indian citizenship. But how these people will prove that they are harassed nor the law says anything about it," Sinha said.

He said the present BJP government at the centre was taking unethical and illegal decisions just to benefit handful of industrialists. "While Air India would be given to some industrialists, and on the other hand Rs 1,45,000 crores has been taken from the RBI for these industrial houses," he alleged. " The economical condition of the country is grim and the agriculture sector is most hit leading to suicides of the farmers," he added.

Sinha is in Lucknow along with his Gandhi Shanti Yatra which has come to Uttar Pradesh after covering Maharastra, Gujarat, Rajasthan and other states. The yatra will end on January 30 at Rajghat. The Yatra commenced on January 9 this year from Gatway of India in Mumbai, where Mahatma Gandhi landed after coming to the country from South Africa.

He also raised up the issues of some governors role in the non-BJP state. "These governors are acting like a BJP cadre and were adopting unconstitutional ways to create hurdle for the democratic elected governments," he said.

Meanwhile, SP president Akhilesh Yadav said that the BJP government was not talking of demonetization as it has failed on it.

"We are opposing CAA,NRC and NPR and will not accept it at any cost," he reiterated with saying that the government had failed in demonetization and it will again meet the same fate in CAA and NRC too.