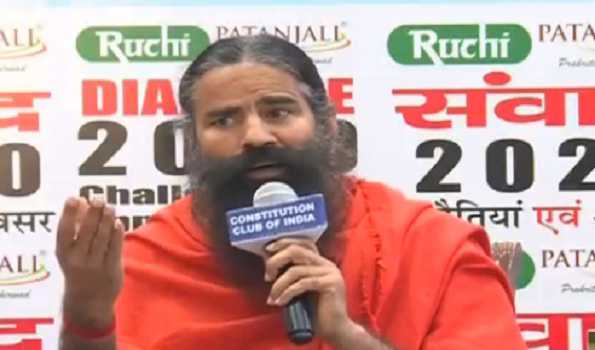 New Delhi/UNI: Urging students to stay away from protests for politicians, Yoga Guru Baba Ramdev on Friday advised them not to involve themselves in public protests all the times as its not their responsibilities.

Talking to mediapersons here, Ramdev said, "These days the country is getting a bad name as it seems that there are only protests and violence going on here. I say to students of all universities, including the JNU, that they should leave protests for politicians otherwise the politicians will become jobless. To spread anarchy and being involved in public protests all the time are not the responsibilities of a student."

"Students should focus on their career and contribute to the nation's development. To chant Azadi slogans all the time especially 'Jinnah type Azadi slogans' is a betrayal of the country and it amounts to sedition," Ramdev said.

"The students should leave the path of violence, anarchy and protest, and contribute to character and nation-building," he said.

"The political parties should understand that the people of this country have given the mandate to the BJP till 2024. We should honour the Constitution and give Modiji time by 2024," he said.

"The opposition should have patience. They can protest but they should also contribute to nation-building. This country belongs to the opposition, judiciary, legislature and other structures of the government as much as it belongs to Modiji or Ramdev or the BJP," Ramdev said.