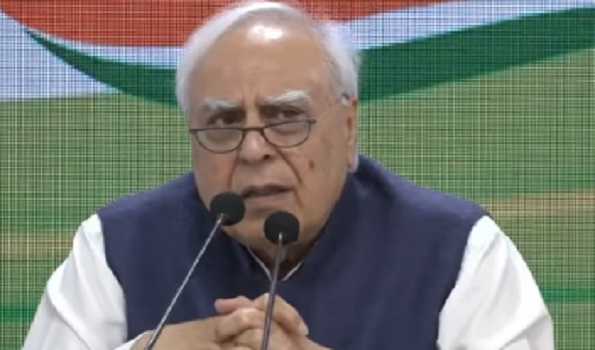 States have to implement CAA but fight must go on, says Kapil Sibal

New Delhi/UNI: The row over new Citizenship law vis-a-vis hurdles in implementation in opposition ruled states took a new turn with Congress leader Kapil Sibal stating if it is held constitutional by the Supreme Court then it will be "problematic to oppose it".

I believe the CAA is unconstitutional

The fight must go on !

For his part, Sibal tweeted: "I believe the CAA is unconstitutional. Every State Assembly has the constitutional right to pass a resolution and seek it’s withdrawal. When and if the law is declared to be constitutional by the Supreme Court then it will be problematic to oppose it. The fight must go on!"


Finance Minister Nirmala Sitharaman at a function organised by the Chennai Citizens' Forum said to say that the law will not be implemented in some states will be 'unconstitutional'.

"A state assembly has passed a resolution against CAA. It is like making a political statement. We can understand that. But it is unconstitutional to say that they will not implement it".

The BJP leaders say the 'admission' of fact and the 'limitation' of their anti-CAA stir vis-a-vis Mr Sibal's remarks would help the party in the fast approaching Delhi elections as it only reflects the 'faulty standpoint' of the Congress and other parties on the new Citizenship law.

The opposition parties had pushed a line that the amended Citizenship Act is discriminatory against Muslims, a charge naturally denied by the BJP.

BJP leader Dr Sahasrabuddhe told UNI: "The opposition parties in a manner has only been hoodwinking the people when they said, we will not allow implement the law......When such a thing is impossible as the new Citizenship law has the approval of Parliament of India".

Much to the delight of the BJP camp, another Congress leader Salman Khurshid, a former External Affairs Minister, also seemed to endorse Kapil Sibal and said if nothing comes from the Supreme Court, the states will have to 'obey' the law or else there could be "consequences".

The observation is in the context of resolution passed by legislatures in Left-ruled Kerala and Congress-ruled Punjab.

The resolution passed by Punjab Assembly where Congress is in power had termed the CAA "divisive" and alleged that it stands for everything opposed to a free and fair democracy, which must enshrine equality for all.

The CPI(M)-led Left government in Kerala --- where Congress is the chief opposition party - is already in legal and constitutional wrangling after it decided to move the Supreme Court against the CAA.

Kerala Governor Arif Mohammad Khan has suggested that the state government had crossed a line by keeping the constitutional head (that is him) in the dark about its decision to appeal against the CAA in the Supreme Court.