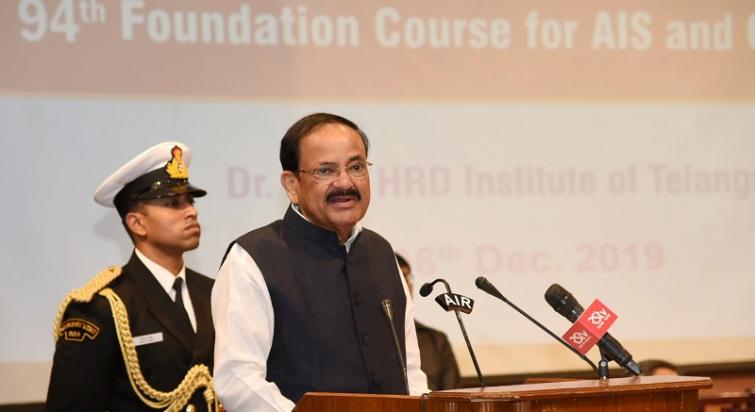 New Delhi/IBNS: Vice President M Venkaiah Naidu on Friday suggested the inclusion of the life stories of Veer Savarkar and other heroes of the freedom struggle from different parts of the country, in school textbooks.

Participating in a Civic Reception hosted in his honor by the Port Blair Municipal Council (PBMC), he said that the historical role of the Cellular Jail in Andaman in the freedom movement should also form part of History textbooks.

He also urged all Members of Parliament, MLAs and MLCs from across the country to visit Andaman and Nicobar Islands and the Cellular Jail.

Recalling his visit to the Cellular Jail the previous day, Naidu described it as a pilgrimage to a sacred temple.

Decrying the attempts to create divisive tendencies among the people, he said that unity is the need of the hour. Pointing out that our freedom was hard-won, he urged all citizens to draw inspiration from the story of India's struggle for independence and from the countless sacrifices made by our freedom fighters and strive to reinforce the unity and integrity of this nation.

Earlier in the day, the Vice President inaugurated the Nature Park and Interpretation Centre at Haddo in Port Blair. He released butterflies and went around the butterfly conservatory at the Park.

The Andaman and Nicobar Islands have around 300 species of butterflies out of which 207 are endemic to the region.  Water bodies with inter-connecting channels have been added in the conservatory to provide the much required moist and airy micro climate for the butterflies to thrive.

Naidu also visited the orchid and fern house at the Nature Park and Interpretation Centre which showcases the habitat of the tropical orchids. So far about 140 species of orchids and an equal number of ferns have been reported from the Andaman Islands.

They include tree-ferns whose origin can be traced back to the Jurassic era. Vanilla, used in confectionaries is also sourced from an orchid species found in these islands.

At the Nature Park, the Vice President also appreciated a wooden sculpture of a mother and child, made out of the trunk of a single Andaman Padauk tree.

The sculpture represents nature as a mother who lovingly nurtures all her creation. A tribal woman has been depicted as the mother, as a mark of deep respect to the tribal people of Andaman who are revered as the protectors of the Islands.

He also flagged off AC buses and electric vehicles. The Vice President complimented the Andaman & Nicobar Administration for the initiative and said that it would provide sustainable mobility solutions and help in keeping the islands clean and green.

He said the electric vehicles would bring down emissions considerably and curb pollution.

Praising the administration for banning the use of single-use-plastics and for implementing the Swachh Bharat Abhiyan in letter and spirit, Shri Naidu said that these initiatives including the increase in renewable energy capacity would promote sustainable development in the Islands.

Expressing his concern about the vulnerability of the islands to climate change, the Vice President said that India was playing a leadership role in promoting renewable energy, especially solar energy through initiatives like the International Solar Alliance.

Launching the project for the replacement of traditional electricity meters with smart meters, Shri Naidu termed it as a pro-poor move.

The Vice President said that Smart meters will increase the ease of bill payment and eliminate the possibility of incorrect billing. He added that paperless billing with smart meters would also help the environment by saving the trees.

He visited a photo gallery and exhibition put up by the Port Blair Municipal Council on ‘Sanitation and Solid waste management’. The gallery showcased the best practices of the PBMC in the arena of sanitation and solid waste management, such as the use of 10 percent plastic in road construction and the restoration of traditional Japanese wells under the Jal Shakti Abhiyaan. The exhibition also displayed several pragmatic and aesthetic ‘waste to wealth’ products.

The Lieutenant Governor, Admiral DK Joshi, the Chief Secretary, Shri Chetan B. Sanghi and others were present on the occasion.