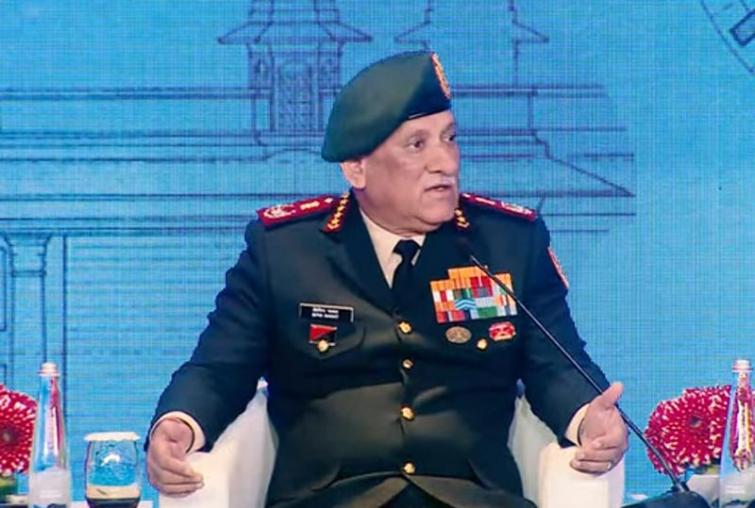 Rawat made the remark ahead of the crucial Financial Action Task Force (FATF) meeting next week when a decision might be taken that whether it is needed to blacklist Pakistan for its failure to curb terror financing.

Speaking at Raisina Dialogue 2020, a multilateral conference committed to addressing the most challenging issues facing the global community, in New Delhi, Rawat said: "We need to bring an end to terrorism."

"Any country which is sponsoring terrorism has to be taken to task," he said in his veiled attack on Pakistan.

"Hard actions need to be taken. I feel one of the measures adopted is of blacklisting by the Financial Action Task Force (FATF) is one good measure. Diplomatic isolation, you have to do this," he said.

“Pakistan will continue to support, fund and back the Taliban if they were to return,” said Rawat while speaking on Day 3 of the Raisina Dialogue.

“You finally have to come into negotiation with the Taliban,” he said. “But the negotiation should bring lasting peace and should not merely be an exit.” He lauded the pressure exerted on Pakistan at the recent Financial Action Task Force (FATF) , which he said was a reflection of global recognition of Pakistan’s role in harbouring terrorists.

Rawat said the war on terror is not going to end unless one can reach to the roots of terrorism.

"The war on terror is not ending, it is something which is going to continue, we will have to live with it until we understand and get to the roots of terrorism," he said.

"Terrorism is here to stay so long as there are going to be states that are going to sponsor terrorism and they are going to use terrorists as proxies, make weapons available to them, make funding for them, then we can't control terrorism," he said.

Rawat said the American approach in the fight against terrorism following the 9/11 attack is needed.

"We have to bring an end to terrorism and that can only happen the way the Americans started after 9/11. They said let’s go on a spree on the global war against terror. Let the nations join together and fight terrorism together,"

He said the move of 'radicalising' people can be countered.

Rawat said: “So you first get to the nerve of who is radicalising people. Then you can start isolating these people gradually and then start the counter-radicalisation program while identifying people who have been radicalised to what degree. You have got to segregate them into degrees. And then look at those who are completely radicalised, target them but then start also looking at the future.”

Rawat shared that de-radicalisation camps are now being operated in India.

Speaking on Pakistan, he said, "Let me tell you, even Pakistan is doing the same. Pakistan also has de-radicalisation camps. They have understood that some of the terrorism that they have been sponsoring is actually hitting back at them.”


Rawat was part of a panel discussion on the evolving nature of counterterrorism. The consensus among the speakers from various countries was that despite a doubling down on the ISIS regime in Syria, the threat of terrorism is pervasive and continues to warrant international attention and greater cooperation within the intelligence community.