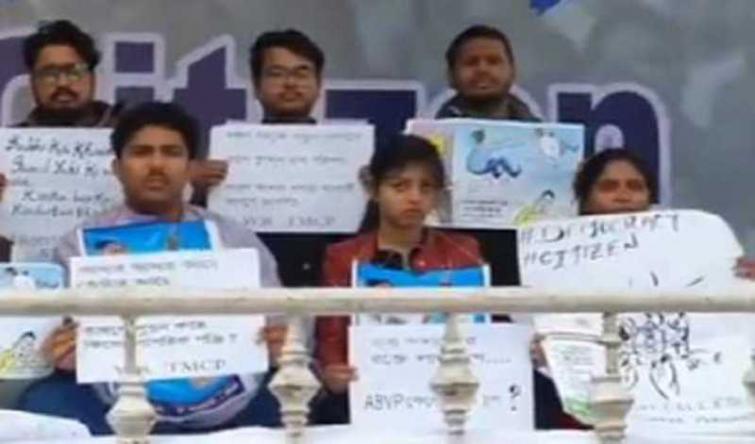 Kolkata/UNI: The Trinamool Congress students’ wing is continuing to protest the Citizenship Amendment Act or CAA with songs, poems and speeches at a sit-in demonstration on Rani Rashmoni Avenue in Kolkata.

Their demonstration entered the fourth day on Monday.

The protesters of the Trinamool Congress Chhatra Parishad (TMCP) were seen carrying posters and placards against the CAA and the National Register of Citizens (NRC).

“NRC, CAA and NPR are not just discriminatory against Muslims but also against the poor, the working-class people and the students. Why do we need to prove our citizenship after so many years of Independence? " a senior TMCP leader asked while addressing the demonstration.

“We want jobs for the youth and food for the poor. The Centre should be bothered about these issues rather than keeping themselves busy deciding who is an Indian and who is not.

"Students’ movements the world over have shown the way forward. We started this movement in Bangla and will continue it till the end," he said.

Banerjee had iterated earlier that the Central Government notification on CAA will stay only on paper, saying, "We will not let it be implemented in Bengal at least."

"Nothing should be done in a democracy on the basis of religion, caste, it is inhumane and illegal. We will continue to protest and will not let any such thing happen," she said.

Trinamool Youth Congress national president and Diamond Harbour MP Abhishek Banerjee has questioned Prime Minister Narendra Modi’s "silence on the needs and concerns of the people of Bengal that Chief Minister Mamata Banerjee had raised before him on several occasions".

He also alleged discrimination between BJP-ruled states and non-BJP ruled ones when it comes to disbursement of funds.

“The Hon’ble PM spoke on a range of issues. However, he has completely brushed aside the real issues, the needs and concerns Didi (Mamata Banerjee) has raised with him on several occasions,” Banerjee tweeted.

“Swiftly disbursing approx Rs 30,000 crore due to be paid to West Bengal, Rs 7,000 crore grant for Cyclone Bulbul, the Iron Bridge he had promised 3 years ago for Gangasagar Mela etc, all these burning issues which needed attention from the PM, seemed completely missing,” said the Trinamool Youth Congress president in another tweet.

“Why didn’t the Hon’ble PM say a single word about it?” questioned the Trinamool MP. “Why does he always discriminate between BJP-ruled states & the non-BJP states? Why similar to West Bengal, all non BJP-ruled states have to face this apathy from the Central Government?” stated Mr Banerjee.

“Bengal has no differences with PM Modi renaming the Kolkata Port after one of the stalwarts of Bengal as a part of his Govt’s renaming spree. Sadly, the name change brings very little relief or benefit to the lives of common people in #Bengal,” Banerjee posted.

He further maintained, “If the Hon’ble PM could have announced any Port Development and/or Waterways Development initiatives which created further jobs & investments, it would have been the perfect gift to the youth of Bengal on Swami Vivekananda’s birthday, which we celebrate as National Youth Day.”