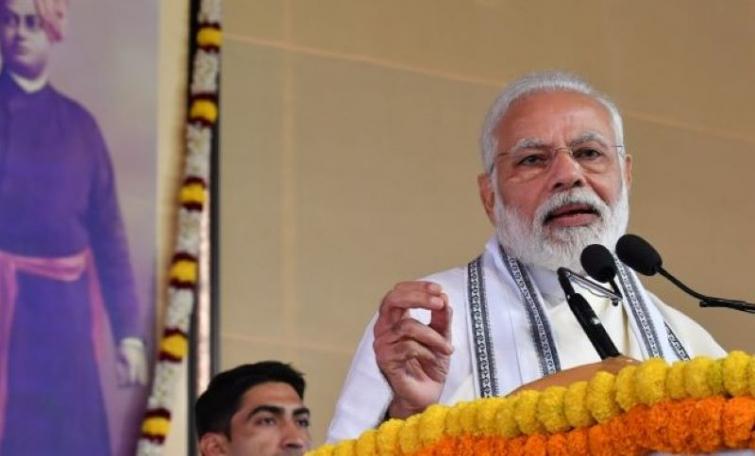 Kolkata/IBNS: After completing his courtesy meets on the first day of his Kolkata visit, Prime Minister Narendra Modi got down to his business of politics by launching one after the another attacks on Opposition on Day 2 of his stay in the eastern state.

Staying over at Belur Math, Modi started his Sunday winter morning by paying tributes to Swami Vivekananda whose birth anniversary is celebrated across the state on this day.

Dressed in white kurta, pajama and no winter clothes, the Prime Minister chose a crowd at Belur Math to launch his political attacks on Opposition. 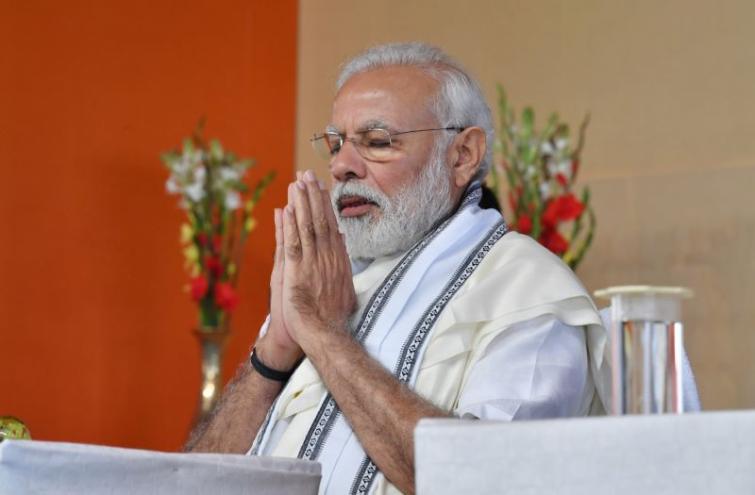 The Trinamool Congress (TMC), Left and Congress- the opponent parties of Bharatiya Janata Party (BJP)- were quick to hit back at Modi accusing him of "politicising" a religious platform.

Tributes to Swami Vivekananda on his Jayanti. Live from Belur Math. https://t.co/yE8lOghIIQ

Taking a jetty from Belur Math on his way back to proper Kolkata (Belur Math is not a part of district Kolkata), Modi waved his hands to the crowd standing to get a glimpse of the Prime Minister and seemed to enjoy the winter morning. 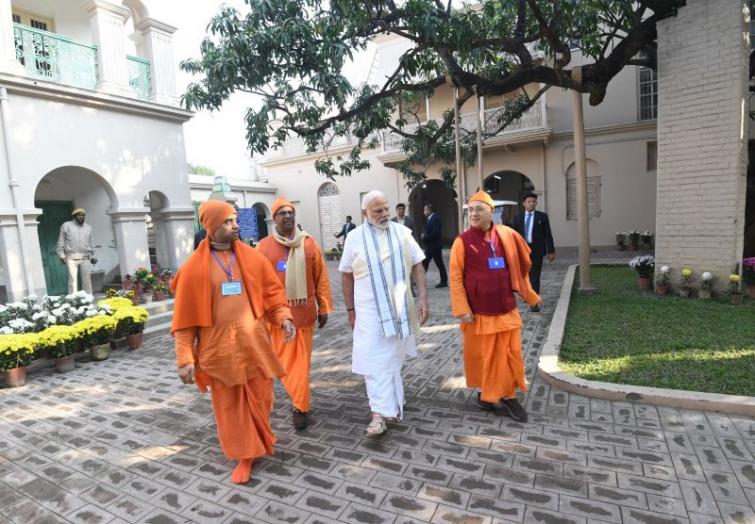 Several university students- mostly Leftists- spent the entire Saturday and Sunday morning on streets protesting against the contentious CAA- which if implemented will grant citizenship to Hindu, Sikh, Christian, Buddhist, Jain, Parsi but not Muslim refugees who came to India from Bangladesh, Pakistan and Afghanistan before 2015- as well as National Register of Citizens (NRC), National Population Register (NPR) and the assault on Jawaharlal Nehru University (JNU) students.

An interesting twist in the tale came in late morning when West Bengal Chief Minister Mamata Banerjee skipped a Port Trust event after receiving huge taunts from the Opposition-Left and Congress- for holding a close-door meeting with Modi at Raj Bhavan on Saturday though the Trinamool Congress (TMC) supremo maintained she met the Prime Minister out of "courtesy". 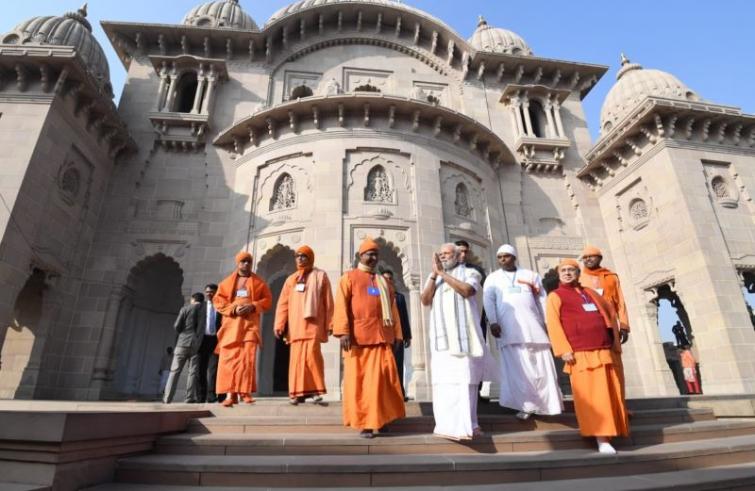 In an absence of the Chief Minister and presence of a huge crowd chanting "Modi, Modi" at Netaji Indoor Stadium, the Prime Minister made veiled attacks on Banerjee and her TMC government which is in place in the state for almost nine years now.

Referring to the TMC government's opposition of Ayushman Bharat, Modi said, "If Ayushman Bharat is allowed in West Bengal then lot of poor people will be benefited. But this has not been done because there is no cut money and no syndicate."

The Central Government is leaving no stone unturned for West Bengal’s development.

I urge the West Bengal Government to participate in Ayushman Bharat and PM Kisan Yojana. Let there be no politics on development issues. pic.twitter.com/p1Ym6mmL7r

The TMC government has opposed to the implementation of Ayushman Bharat Yojana which is a national health scheme.

Besides launching attacks on the Opposition, the Prime Minister on Sunday renamed the Kolkata Port as Syama Prasad Mookerjee Port which has also not gone down well with the TMC.

Hitting back at Modi, TMC MP Abhishek Banerjee tweeted, "Bengal has no differences with PM Modi renaming the Kolkata Port after one of the Stalwart legends of Bengal as a part of his Govt’s renaming spree. Sadly, the name change brings very little relief or benefit to the lives of common people in #Bengal."

Bengal has no differences with PM Modi renaming the Kolkata Port after one of the Stalwart legends of Bengal as a part of his Govt’s renaming spree.
Sadly, the name change brings very little relief or benefit to the lives of common people in #Bengal. (1/2)

"If the Hon’ble PM could have announced any Port Development and/or Waterways Development initiatives which created further jobs & investments, it would have been the perfect gift to the youth of Bengal on Swami Vivekananda's birthday which we celebrate as National Youth Day," he added. (sic)

If the Hon’ble PM could have announced any Port Development and/or Waterways Development initiatives which created further jobs & investments, it would have been the perfect gift to the youth of Bengal on Swami Vivekananda's birthday which we celebrate as National Youth Day (2/2)

Despite the political hurls, the TMC like on Saturday tried to maintain a balancing act by sending once again West Bengal Minister and Kolkata Mayor Firhad Hakim to Kolkata Airport to see off the Prime Minister who had barely travelled on roads due to the unsparing protests mostly by the Leftist students.

The first day began with the launch of citywide protests by university students- mostly Leftists- who took out rallies from five different locations namely Golpark, Jadavpur 8B Bus Stand, Esplanade, College Street and Hatibagan while #GoBackModiFromBengal trended throughout the day on Twitter.

With mostly Indian Flag, the students staged a protest at Airport Gate Number 1 with an intention to block Modi's entry into the city though the Prime Minister took a chopper (helicopter) after landing at Kolkata Airport to reach Raj Bhavan. 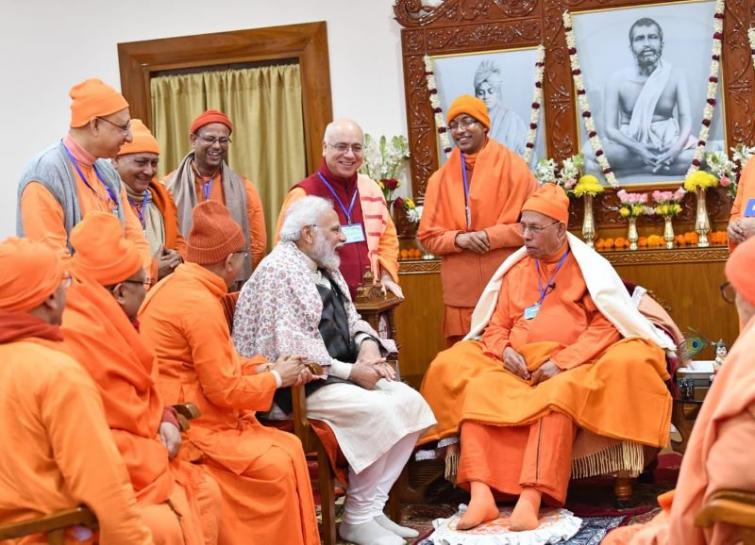 At a time the students were blasting Modi with "Go Back slogans", Modi was warmly greeted by Hakim, who is one of the closest people of West Bengal Chief Minister Banerjee.

After reaching Raj Bhavan, Modi first met Banerjee and later a host of BJP leaders including their president Dilip Ghosh.

Visiting the Old Currency Building at an event in the meantime, Modi refrained from making any political statement but spoke about "India". 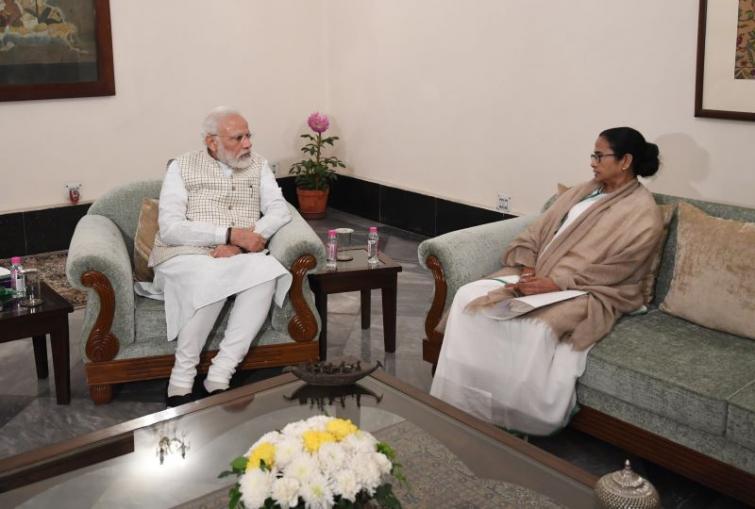 He said, "India’s history isn’t merely about battles and power struggles. Every part of India has unique art, culture and music. Our land has produced outstanding Saints, seers and social reformers who have led extraordinary changes in society."

Modi went to Belur Math in a jetty (launch) while the Leftists students occupied the entire downtown Kolkata to protest virtually collapsing the transport routes in major parts of the city.