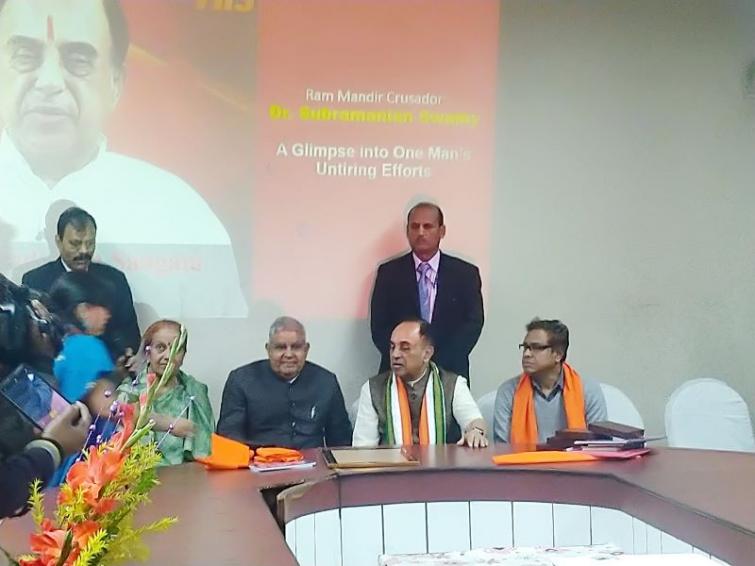 Jagdeep Dhankhar most suitable to be the Governor of WB: Subramanian Swamy

Kolkata/UNI: BJP leader and Rajya Sabha MP Subramanian Swamy on Saturday said West Bengal Governor Jagdeep Dhankhar is the most suitable person to be the Constitutional head of the state.

Dr Swamy stated this in a programme organised by the Bengal chapter of Virat Hindustan Sangam to felicitate him.

West Bengal Governor Jagdeep Dhankhar was the chief guest of the programme.

"He (Dhankar) had been a famous lawyer and knows the law like the back of his palm. We wanted a courageous and fearless governor ...someone like him, who knows law too well, was badly needed in West Bengal because people here have to be reeducated on the laws," he noted.

The BJP leader said Mr Dhankhar's role as the West Bengal Governor was being praised in Delhi.

"He has become famous in Delhi," Dr Swamy added.

The West Bengal governor has been a fierce critic of Chief Minsiter Mamata Benerjee and the functioning of her Trinamool Congress government. The governor and the chief minister have been involved in bitter exchange of words, often taking their official communication to public platforms. Recently, Banerjee was severely criticised by Dhankar after she ended up demanding international intervention in ascertaining the validity of the Citizenship Amendment  Act.

Lauding Dr Swamy, Mr Dhankhar said, "He takes on the issues that others would like to avoid, faces them head-on, never relents and wins."

"The guidance and the wisdom he gave us on Ram Mandir was missed by most of us. The year 2019 would go down as a year to be remembered, a year of epochal development and he is at the centre of it," Mr Dhankhar opined.

"Of course Dr Swamy is a health hazard..some people lose their sleep because of him. They lose their composure," he quipped.

"He speaks out of conviction and his due diligence is of the highest level. Most of us fear the consequences of what we speak, but he is never afraid of revealing his mind. More often than not he has turned out to be prophetic, whether it is economics or politics," said the Governor.