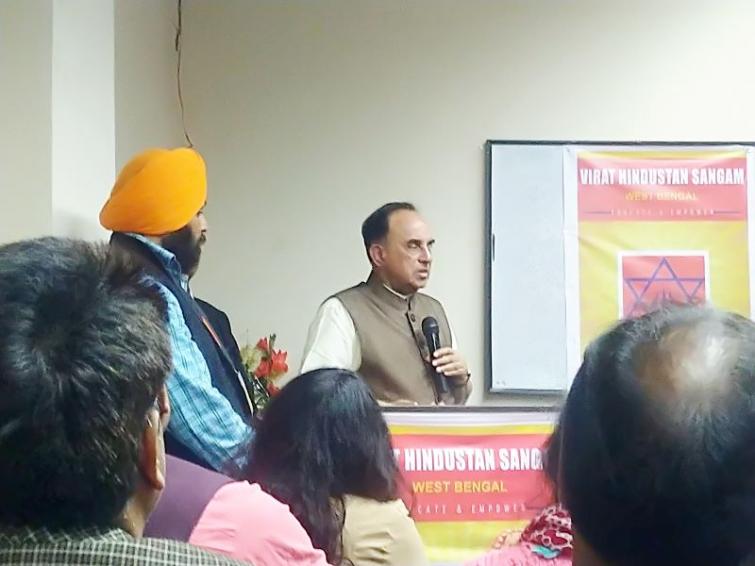 Except economy, opposition has no valid issue against the govt: Subramanian Swamy

Kolkata/UNI: Asserting that the Opposition has no valid issue against the Centre except the performance of the economy,  Rajya Sabha MP and BJP leader Subramanian Swamy on Saturday said the brouhaha over CAA and NRC is the tactics to gain attention by the Left and the Congress as they cannot win elections in Bengal.

"The Congress and the Left are creating ruckus in West Bengal as they know well they have no chance of winning elections here," said Dr Swamy at an event organised by Virat Hindustan Sangam here.

Dr Swamy asserted that the opposition had no valid issue except the performance of the economy.

West Bengal witnessed widespread violent protests over the passing of the amended citizenship act last month. Violence broke out in many places across the state, the 24-hour nationwide strike called by trade unions affiliated to Left and other parties on Wednesday.

Chief Minister Mamata Banerjee had slammed the Left parties for "indulging in violence" in the name of enforcing bandh in the State.

"We have not performed well in the economy, but that situation is recovering. It will improve soon. Yes, we have not taken certain decisions, which we should have taken earlier. I am sure the gravity of the situation has been understood by the prime minister and steps have been taken accordingly. Other than that, the opposition has no issue," he said.

Describing the achievements of the government, the BJP leader said terror control has been its biggest achievement. He added that there have not been a single communal riot in the last six years.

"Our record has been tremendous in controlling terrorism. Previously, during the UPA rule, hundreds of people were killed in terrorist attacks every year. Last year, only nine people were killed. People said the removal of Article 370 will lead to chaos and destruction, but there has been complete peace," he said.

Referring to the Jammu and Kashmir situation, the Rajya Sabha MP said some countries had expressed concern over the restrictions after the abrogation of Article 370, but they were satisfied after their visit to the union territory.

"Some countries had doubts, but their representatives saw that the schools and offices are working, the markets are open," he said, adding that at the moment there is only internet restriction and some leaders have been kept in confinement.

Hitting out at the Congress, he said the party had passed a resolution on November 26, 1947, that all persecuted Hindus and Sikhs of Pakistan should be given Indian citizenship, but the Jawaharlal Nehru government did not implement it. Even Mahatma Gandhi, one month before his assassination, had said the same thing."

"The last statement in favour of CAA by the Congress was in Rajya Sabha in 2003 by the leader of Opposition Dr Manmohan Singh, who had requested Advaniji, who was the Home Minister and the Deputy Prime Minister, that these unfortunate people are given citizenship. Now, of course, after Sonia Gandhi joined, he has changed his speech," he said.

Dr Swamy said the United Nations has said that only persecuted individuals can be called refugees, but people entering other countries illegally to gain economic advantage cannot be treated as refugees.

"Many countries do not want to change their religious composition. Hungary has recently announced that they will only allow Christian refugees. Poland is already doing it," he pointed out.

"Demanding citizenship for Muslims is illogical. They cannot be persecuted in Islamic countries. Even if they are, like the Shias in Pakistan, they go to Iran and not India. Those fearing persecution for their thoughts and ideologies, too, don't wish to stay in India," he stated describing why CAA accords citizenship to refugees of the minority communities in Pakistan, Bangladesh and Afghanistan.

He said there were at least 31,300 refugees who have sought refuge in India following religious persecution. "These people had no documents. They were just given a piece of paper allowing them to live in India. They could not get jobs or study in the absence of the documents. They were left to languish. Those people are now rejoicing," he stated.

Some 26,000 of the refugees, who have fled persecution, are Dalit Hindus, Dr Swamy said and added that they were forced to do menial work and denied a life of dignity.

"These people are now rejoicing. They finally have hope for a better life and future," he added.