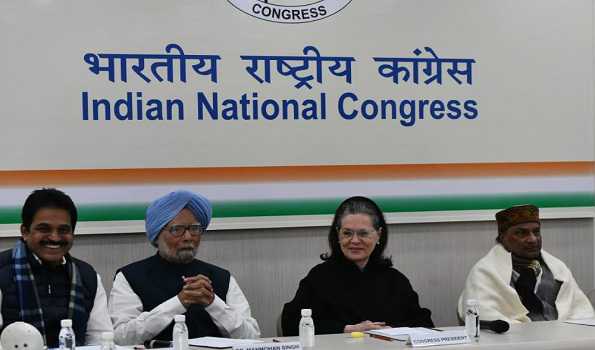 New Delhi/UNI: The Congress working committee, the highest decision-making body of the Congress, met here on Saturday to discuss the current political situation, amid the countrywide protests against the Citizenship Amendment Act and the National Register for Citizens.

Former party chief Rahul Gandhi was, however, not present at the meeting.

Sources said that topmost on the agenda of the meeting, being held at the headquarters of the AICC, is to discuss the situation arising in the country due to widespread unrest over the passage of the Citizenship Amendment Act and decide on the future course of action by the party.

The sources said the CWC is expected to come up with a detailed programme for protests against the Act as also against the violence against the students and the teachers in the JNU by masked men on Sunday.

The Congress has already expressed its support to the countrywide agitation against the CAA and the NRC and the agitation by the JNU students against the violence in the university campus on Sunday.

The Congress president has condemned the violence and had set up a fact-finding team to probe the incidents of violence against students and teachers.

The fact-finding committee visited the university campus earlier in the week. Sources said the committee, in its report, has raised questions on the Vice Chancellor’s role in dealing with the crisis at the JNU Campus.

Gandhi had demanded a judicial inquiry into the JNU violence. She had said that the entire party stands in solidarity with the students.

Besides the discussion on the anti-CAA protests, CWC is also expected to discuss the current economic slowdown in the country and come out with a statement blaming the present BJP government for its inability to tackle the slowdown in the economy.

The CWC meeting comes ahead of the meeting of the Opposition parties called by the Congress on January 13 to discuss the emerging situation and incidents of violence against students.

The Opposition parties are meeting for a joint strategy on the issue of anti-CAA protests and alleged police brutality against the students.