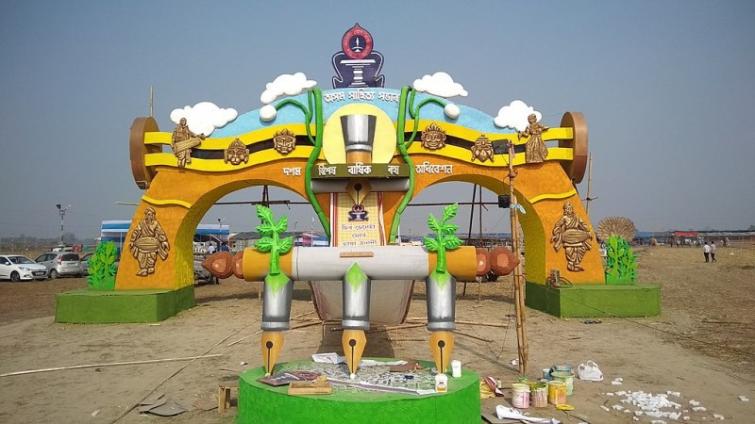 Guwahati/IBNS: Sahitya Akademi award-winning writer and former DGP of Assam Kuladhar Saikia has been elected as the president of Asom Sahitya Sabha – one of the biggest literary body of the country.

He will assume office for a two-year term in the next biennial session of the literary body.

Kuladhar Saikia will be the 103rd president of the apex literary body.

The 61-year-old Ex-Assam cop and writer won the prestigious Sahitya Akademi award in his short story collection ‘Akaxor Sobi Aru Onyannya Golpo (Picture of the Sky and other tales) in 2015.

After studying at Delhi School of Economics, Kuladhar Saikia did his PhD in economics of crime from IIT, Guwahati in 2018.

Sharing his feelings after being elected as the president of Asom Sahitya Sabha, Kuladhar Saikia said that – “It is now bigger responsibility for me...when you are leading a literary and cultural organisation which is more than 100 years old.”

“I have lot of responsibility now. I feel that such an organisation should create bridges between different linguistic and ethnic groups in my areas and it should be an inclusive organisation. There are lot of technical changes across the world and new technologies have come in printing, publications etc. So I want to bring such type of atmosphere in the whole sahitya sabha organisation. We would like to open up the doors and windows for the young generation, authors, writers, literature-loving people,” Saikia said.

He futher said that – “In my police tenure, I was always insisting on having good police-public relation, good interface with the people and that is how we control the situation in the publication of the updating National Register of Citizens (NRC), movement over the Citizenship (Amendment) Bill.

“Here also I am planning to have such type of inclusive atmosphere. During my police tenure I could give my time to writing because that is my hobby. I have been writing since my school days. I have come as a president of Asom Sahitya Sabha and it’s a good feeling because it has gone through a democratic process and the people have accepted me, they elected me on this platform,” Saikia said.

Kuladhar Saikia said that – “A person can be of any profession, if he has a literary branded mind, interested in literature, then he or she can pursue all that.”

On the other hand, Mrinalini Devi – mother of Assam Finance minister Dr Himanta Biswa Sarma was elected as vice-president and Jadhab Chandra Sharma elected as general secretary of the literary body.