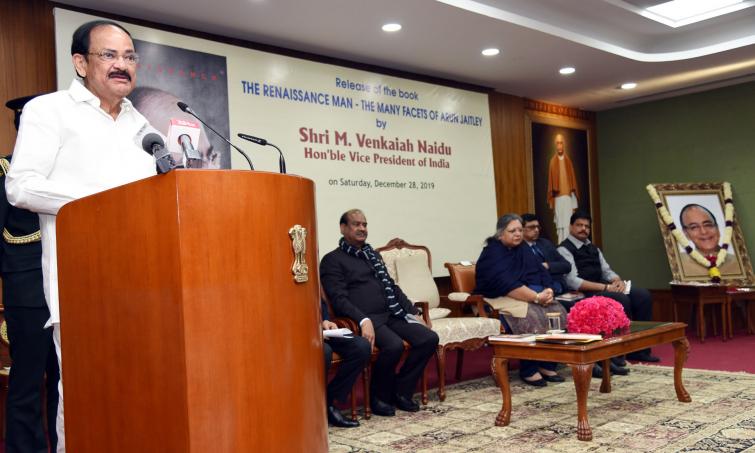 New Delhi/IBNS: Vice President of India, M Venkaih Naidu today called for an enlightened debate on all larger issues and stressed that dissent has to be expressed in a democratic and non-violent manner.

“Constitutional methods and violence do not go together,” he said.

Naidu paid rich tributes to Arun Jaitley on his Birth Anniversary today and went down the memory lane recalling his long association with him.

Releasing a book titled, ‘The Renaissance Man-The Many Facets of Arun Jaitley,’ Naidu said that even months after the passing away of his closest friend, he found it difficult to come to terms with the bitter fact that Jaitley was no more.

He said “Whenever there is a need for enlightened debate, Jaitley will be missed.”

Describing Jaitley as a thorough gentleman and a man of impeccable integrity, and said that he never compromised on principles and was a staunch opponent of corruption.

Stating that Jaitley was a shining example of a leader with 4Cs - Character, Calibre, Capacity, and Conduct, VP expressed concerns that there was a worrisome trend in politics with people bringing in other 4Cs- Caste, Community, Criminality, and Cash.

Naidu asked aspiring politicians to emulate these qualities of Jaitley and serve the nation.

Recollecting his association withJaitley, the Vice President said that Jaitley Ji and he became fellow travelers in the “rough-and-tumble of Indian politics and developed a mutual admiration and respect for each other.

Describing Jaitley as “a multi-faceted genius and a powerhouse of knowledge with a sharp analytical mind,” Shri Naidu recalled his ability to communicate effectively and explain even the most complex matters in a simple, lucid manner. “His frankness was another admirable quality and he never hesitated to call a spade a spade,” he added.

Stating that Jaitley was his go to man for past many decades, the Vice President said that he used to seek Shri Jaitley’s sage counsel whenever needed.

Referring to Jaitley’s deft handling of the economy at a critical time, the Vice President said that his persuasive skills and the spirit of camaraderie were in full display to evolve a consensus during the tough negotiations with states for GST.

Unmindful of his health, Jaitley had to burn the midnight oil on many occasions to build consensus and for the successful roll-out of GST, he said.

The Vice President also referred to various measures taken by Jaitley as Union Finance Minister to ensure that the banking sector did not slip into a deeper morass due to NPAs.

The Insolvency and Bankruptcy Code introduced during his tenure proved to be a revolutionary step, he said.

VP said that the book was brought out by his son, Muppavarapu Harshavardhan and daughter, Deepa Venkat as a token of love and affection for Arun Jaitley.

The book was released in the gracious presence of Sangeeta Jaitley, wife of late Arun Jaitley, his daughter, and son.