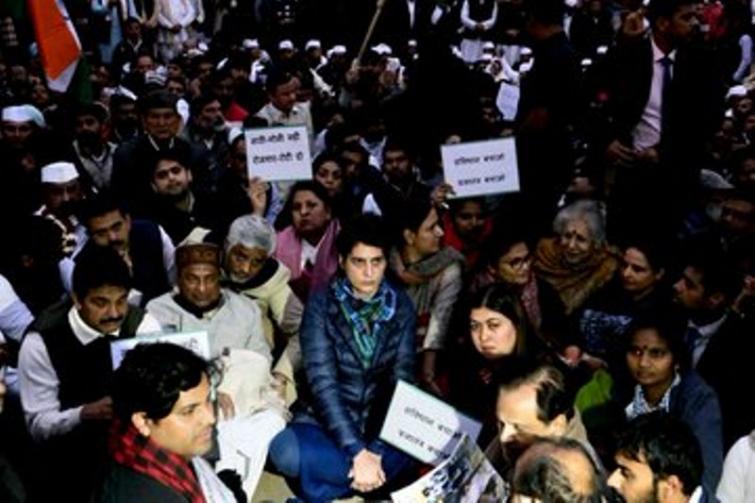 New Delhi/IBNS: Joining a protest at India Gate in Delhi over the clash between Jamia Millia Islamia University students and the police in the national capital on Sunday, Congress leader Priyanka Gandhi Vadra slammed the Bharatiya Janata Party (BJP)-led Centre and described the incident as an attack on the soul of the nation.

"It's their right to protest.You entered into their library, dragged them out and thrashed them up. This is tyranny," she said.

"Every person in Congress will fight against this tyranny and stand with the students," she said.

Meanwhile, Prime Minister Narendra Modi earlier in the day described the ongoing violent protests against the CAA as 'unfortunate'.

He said damage to public property and disturbance of normal life has never been a part of India's ethos.

"The need of the hour is for all of us to work together for the development of India and the empowerment of every Indian, especially the poor, downtrodden and marginalised. We cannot allow vested interest groups to divide us and create disturbance," PM tweeted.

"Violent protests on the Citizenship Amendment Act are unfortunate and deeply distressing. Debate, discussion and dissent are essential parts of democracy but, never has damage to public property and disturbance of normal life been a part of our ethos," he said.

The PM said: "This is the time to maintain peace, unity and brotherhood. It is my appeal to everyone to stay away from any sort of rumour mongering and falsehoods."
Several parts of India are witnessing massive protests over the recently passed Citizenship Amendment Act by the government.