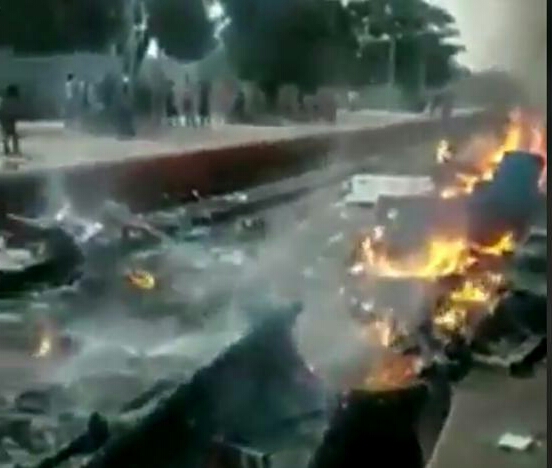 Kolkata/IBNS: Five trains were set on fire at the Lalgola railway station of the Murshidabad District of West Bengal by anti-Citizenship Act protesters this evening, media reports said.

While the situation is gradually returning to normal in the Northeast, violence continued unabated in the state with protesters blocking roads and railway tracks.

Today in the morning, agitators blocked roads around Sakrail station in Howrah district and later set the ticket counter on fire, media reported. They also beat up RPF personnel in the station when they tried to stop the rampage, the reports added.

NH34 which connects north and south Bengal was blocked near Murshidabad, bordering Bangladesh.

"Do not take law into your own hands... administration will not tolerate inconveniences to the general public and take strict action according to law," Banerjee was quoted as saying by media.

West Bengal Governor Jagdeep Dhankhar also expressed concern over the law and order situation across the state over protests against Citizen (Amendment) Act.

He said, "Chief Minister as per oath has to ‘bear true faith and allegiance to the Constitution of India..’ and I as Governor will ‘to the best of my ability preserve, protect and defend the Constitution and the law.'"