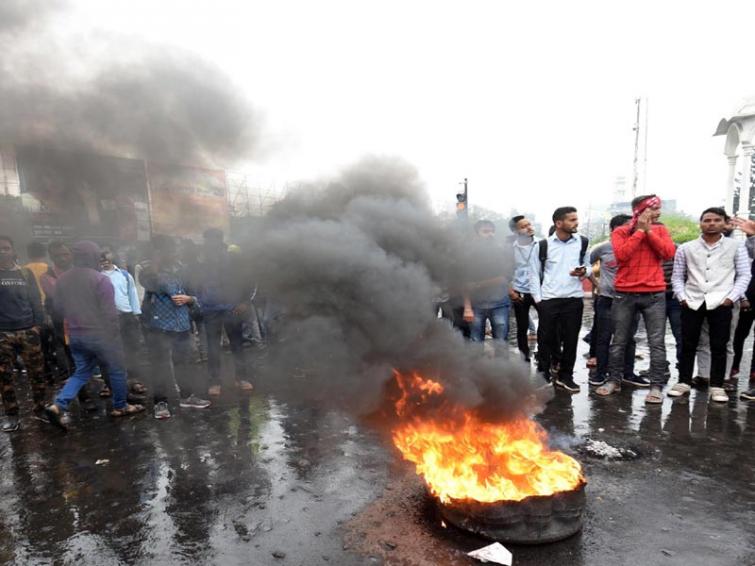 Kolkata/IBNS: West Bengal is witnessing another day of violence over the new citizenship law on Saturday even as Chief Minsiter Mamata Banerjee warned of strict action against the miscreants.

"Do not take law into your own hands... administration will not tolerate inconveniences to the general public and take strict action according to law," Banerjee was quoted as saying by media.

West Bengal Governor Jagdeep Dhankhar also expressed concern over the law and order situation across the state over protests against Citizen (Amendment) Act.

The agitators attacked government properties, particularly the Indian Railways and buses on the highway, in which thousands of commuters got stranded at different stations.

He said, "Chief Minister as per oath has to ‘bear true faith and allegiance to the Constitution of India..’ and I as Governor will ‘to the best of my ability preserve, protect and defend the Constitution and the law.'"

More than a dozen vehicles were set on fire, railway stations were also ransacked in the state by protesters.

Similarly, reports of violence also emerged from Beldanga in Murshidabad.

The station area was also ransacked.

Reports of violence also emerged from Kona Expressway and NH6 in Howrah.

The National Highway 34, one of the arterial roads that connect the north and south Bengal, was blocked in Murshidabad, a Muslim majority region in the state.

Several other roads in the district were also blocked, police said.

Police and RAF have been deployed in the area.

The ticket counter at Uluberia station was set on fire.

Meanwhile, TMC leader and Kolkata Mayor Firhad Hakim said those who are engaging in violent protests in the state are only making 'BJP stronger'.

"I urge my friends to not indulge in violence. The unrest will only make the BJP stronger. The vandalism is affecting the people of Bengal. The fight is not Hindus vs Muslims. We need to fight against the NRC and CAB as Indians," Firhad Hakim was quoted as saying by The New Indian Express

"Few people are fueling this unrest, don't fall for it. Don't bring trouble to the people of Bengal. If you really want to protest then join Mamata Banerjee' rally in a civil way," he said.

West Bengal BJP President Dilip Ghosh on Saturday compared the protests against the amended Citizenship Act, which took a violent turn across the state on Friday, with the Parliament attack on Dec 13, 2001.

"Dec 13 reminds us of the black day of Parliament attack. The temple of our democracy was attacked on this day in 2001. Over the years we recovered from the blow. But, the violent protest across the state against the amended Citizenship Act passed in parliament has renewed the memories of 2001. These violent protests are a blow on the Constitution," Ghosh said.

Ghosh said laws on conferring citizenship to migrants had been amended from time to time. The new amendment has taken into consideration only Bangladesh, Afghanistan and Pakistan as these countries were once part of India and are currently Islamic states.

BJP leader Rahul Sinha said if the violence continues then Presidential Rule will be imposed in West Bengal.

"If this situation continues for few more days then Presidential rule will be imposed in West Bengal and Mamata Banerjee's rule will end in 2020 only as the BJP had earlier said," Rahul Sinha said.

"What harm the CAB did to minorities by granting to citizenship to people belonging to Hindu and five other religions who came from Bangladesh, Pakistan and Afghanistan?" Sinha questioned.