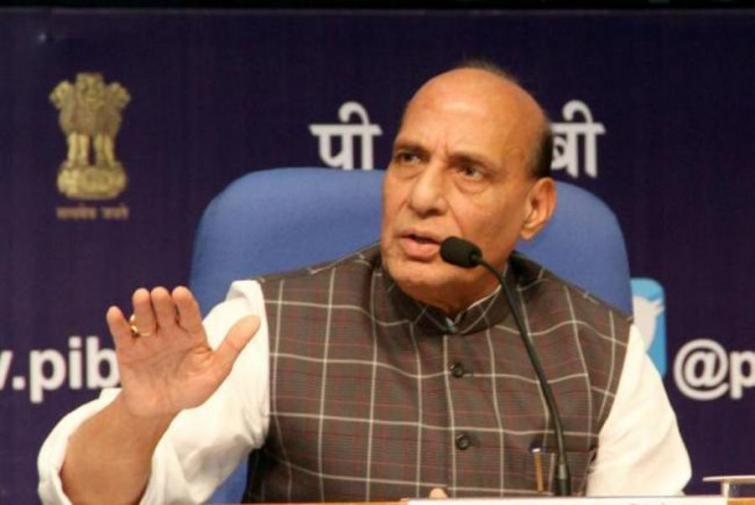 New Delhi/UNI: Condemning the rape and murder of a 26-year-old veterinarian in Telangana, Government on Monday assured the Lok Sabha members that it was ready to debate and make necessary amendments in the law with the consensus of the House.

''There are no words to condemn such a heinous incident. There is no bigger 'inhuman act' than this incident. The whole country is ashamed and hurt,'' Defence Minister Rajnath Singh said during Zero Hour.

''After the Nirbhaya case, new law was brought in, still such incidents are taking place. I have no objection if debate is taken up. The government is ready to make provisions to curb the rising incidents,'' said Mr Singh who is the Deputy Leader of the House.

Mr Singh said he leaves to Speaker Om Birla to decide whether a debate is to be taken and ''we are ready to make amendments in the law with the consensus of the House''.

Four men allegedly raped the ill-fated woman before strangling and setting her on fire near Hyderabad.

Condemning the incident, the Speaker  maintained ''such incidents worry and hurt us''.

''India's Parliament has always expressed worry on such cases. We condemn the incident in one voice,'' he stated.

The Business Advisory Council will discuss on the issue, he said, adding that if required, the law will be amended.

''We expect that such incidents do not recur,'' he further said.

Making an intervention, Minister of State for Home G Kishan Reddy said the government was ready to take steps to curb the crime against women. ''There is already a number of emergency response system to help the victims,'' he said.

Minister of State for Home Kishan Reddy also assured the House about every change necessary in the law and said that the government would work on the policy of zero tolerance in such cases.

''Changes in related laws are being drafted. Police Research and Development Bureau has been given the responsibility. A letter has been written to the states asking for suggestions on this draft and it will be presented in Parliament at the earliest,'' he said.

Mr Reddy said that the government has issued a single helpline number "112" across the country to curb such incidents.

BJD member Pinaki Misra said the House spoke in one voice for death penalty on such heinous crimes three years ago. ''There should be a deterrent in place to curb such crimes against women,'' he said.

There is no point of fast-track courts and deterrence, if the convicts are not punished, he stressed.

Convicts in Nirbhaya case are yet to receive punishment seven years after the incident, he said.

Seeking collective wisdom of the House, Mr Misra said expeditious punishment is required and the government should act in this direction.

Uttam Kumar Reddy of the Congress condemned the Telangana Home Minister's 'insensitive' comment that the victim should have called the police instead of her sister. He said indiscriminate sale of liquor is taking place on highways, as was the case in this incident that the accused were in drunken state when they committed the crime.

Saugata Roy of the Trinamool Congress said the local administration was callous, and stressed that rape should be punishable by only death sentence.

Vinayak Raut of the Shiv Sena demanded that a law be brought in so that culprits were punished within six months.

V Geetha Vishwanath of YSRCP said such incidents should not be seen through political prism.

Kunwar Danish Ali of the BSP said lawmakers should rise above party lines and said this incident was highly condemnable.

Locket Chatterjee of the BJP said there was no fear of law, crime incidents against women are taking place.

K Ram Mohan reddy of TDP said a strong law should be brought and death should only be the punishment in these gruesome cases.

"Gender sensitisation was required,'' he maintained and added that 'No means no', should be understood by men.

Anupriya Patel of Apna Dal said the whole country and its soul is ashamed of the incident. State governments and the Centre have proved to be a failure in curbing crimes against women, she averred.

She said ''We are not able to convey the message that we are capable of protecting women. A strict message should be sent.''