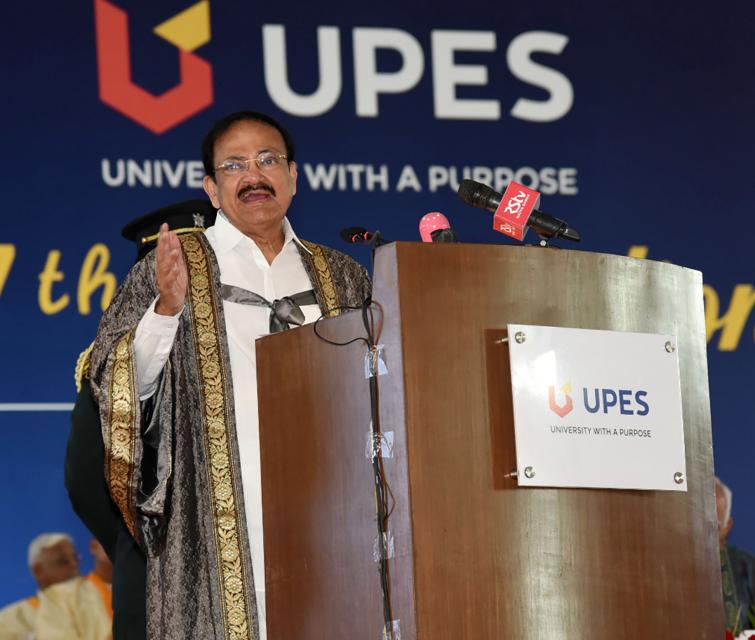 Education must inspire a thirst to innovate in our students: Vice President Naidu

New Delhi/IBNS: Vice President M. Venkaiah Naidu on Saturday said that education must not only foster scientific spirit and entrepreneurial endeavour in students but also create in them a thirst to innovate.

Addressing the 17th Convocation of University of Petroleum and Energy Studies (UPES) in Dehradun today, Naidu called for imparting Entrepreneurial Education in our technical institutions so that a larger number of our graduates do not end up as mere job seekers but possess the confidence and the skills to create businesses, jobs and wealth.

The Vice President said that the world is increasingly turning its attention to India today because of its steady pace of growth which is much faster than most major economies of the world.

He added that India also has the advantage of an enormous youth population, with 50% of its population below 25 years of age.

He opined that if this demographic dividend is to be realized and leveraged for inclusive and sustainable growth and development, our youth must be equipped with domain focused education, skills and expertise.

Expressing concerns about the employability of our young graduates, Naidu urged universities and the industry to join hands to groom students to be future-ready professionals.

Observing that routine jobs are now being replaced by Artificial Intelligence and Automation, the Vice President asked educational institutions to be quick on their feet to adapt and evolve.

He emphasized that universities must train students to perform tasks that machines simply cannot.

“Design thinking principles should be introduced in schools along with digital skills”, he added.

Observing that the 4th Industrial Revolution is on the horizon and he urged educational institutions to prepare for it by acquiring knowledge and skills to make the big leap forward.

Stressing that India needs to India needs to rethink the entire education system, Naidu cautioned that if we don’t innovate, we stand the risk of falling behind.

Referring to the exalted status of ‘Vishwaguru’ that India enjoyed in the past, he called on Indian universities to strive hard to make India a hub for global learning, once again.

He asked Indian universities to aim be among the top 100 institutions in the world.

Highlighting the plethora of initiatives of the government such as NISHTA, ARPIT and DHRUV, the Vice President cautioned that government working in isolation will not succeed in creating a world-class education system.

“Each one of our institutions, both public and private, must work in tandem with the government,” he said

Opining that it is not sufficient that we produce graduates who are academically proficient, Shri Naidu said that students must develop not only cognitive skills, but also social and emotional ‘soft’ skills, including cultural awareness and empathy, perseverance and grit, teamwork and leadership, among others.

The Vice President said that culturally, India has been, and continues to be, a cradle of great diversity in all walks of life and added that these rich legacies to world heritage must not only be nurtured and preserved but also enriched.

He urged Universities to strive to bridge the gap between theory and practice and promote research in a big way by networking with industries, R&D labs within India and abroad.

Stressing that India’s strength is in its young people who will play a key role in transforming India into a major economic and technological power, he asked them to remember their social responsibility and to give back to the people of India the fruits of technological advancements.